History and theory of garden design and landscape architecture > Garden and Landscape Books > Essays on Cities and Landscapes by Tom Turner - contents list > 6.2 Planning with GIS

Planning offices, everywhere, are using GIS to handle what were once known as plans. At present, many of the systems are used only for map management and for the spatial indexing of data. This is a consequence of digital mapping. In time, GIS will revolutionize planning as surely as the internal combustion engine revolutionized transport. Excepting sentiment, there is little reason to keep that old word "planning' in use. It derives from an obsolete technique for representing roads, buildings and landform on flat paper. Computers now provide the means of doing this job more effectively. Using a computer-aided design (CAD) program, one can switch at will between plan, elevation, and perspective. Wedding a CAD program to a GIS program, one can plunge below the earth's surface or soar above, to take "landscapes' of streets, geology, soils, habitats, hydrology, airflow, temperatures, traffic, spatial patterns or whatever (Figure 6.3). Computer software can produce multidimensional models of the environment, instead of dull old plans. The models can be social, economic, aesthetic or physical.

So why not substitute the term "modelling' for "planning'? From a geometrical point of view, the superiority of "modelling' is beyond question. Plans can be generated from 3-D models; 3-D models cannot be generated from 2-D data. Q.E.D. The only drawback to "modelling' as a professional title is that it does not, as yet, imply an ability to guide future events. If one speaks of "the would-be architect of modern Europe' or "the planner of a military campaign', one implies an instrumental role (Figure 4). "Town modeller', by contrast, suggests someone who has extended their skills from modelling railways to modelling towns. Napoleon used physical models to help his commanders to plan assaults on fortified cities. For similar reasons, today's military spend enormous sums of money on GIS. They know that the people with the best models are those in the best positions to control events. GIS can be used for missile guidance, bomb damage reports, arranging logistic support and identifying nodal points in enemy command and control systems.

The military uses of GIS remind one that it can be dangerous for any group or nation to have a monopoly of knowledge. Francis Bacon, meditating on heresy, declared that "Knowledge itself is power'. The environment has suffered, fearfully, in the twentieth century from single-purpose management by experts. Their power, coming from their knowledge, led to single-purpose planning -- which has been a prime cause of environmental despoliation. Foresters think mainly of wood production, traffic planners of traffic, housing experts of housing and agriculturalists of food. All these land use experts have caused harmful negative side-effects on other land uses. Town planners, landscape planners and regional planners have fought against the trend, but with an inadequate conceptual apparatus and insufficient data. Their strategy has been to promote themselves as super-experts who can coordinate subsidiary experts, as field marshals coordinate infantry, tanks and artillery.

The dilemma is real and formidable so long as we think of the planner as the man whose job it is to tell all the other ("specialist') chaps how to do their jobs because he knows so much about them and can "coordinate' them into a "master plan' which is based on a superior view of the public interest'. (McLoughlin, 1969)

This was a wise remark, but McLoughlin went on to describe a hierarchical set of planning goals from which he believed it possible to establish "performance criteria for a definable system'. There is an echo of Alexander's Notes on the Synthesis of Form in this vision, and the result was an equally preposterous technocratic fantasy (Figure 6.5):

Considering economic growth first, an objective might be to maintain area growth in gross urban or regional product at a rate comparable with that of the nation.

Objectives for residential activity and space may take a number of forms: maximizing total rateable values or rateable values per head of population or per household could be a popular measure...

An operational objective for journeys to work may be cast in a form such as "the average journey to work should not rise significantly above 5.3 miles'.

In matters of environmental quality, more than in all other kinds of planning objectives, noble sentiments are only a beginning; if they are to be capable of fruitful discussion and subsequent operational use they must be put into a form which makes these possible. (McLoughlin, 1969)

Attempts to define overall objectives for planning usually do result in banalities and platitudes. The 1985 People's Plan for the London Borough of Greenwich asserted that:

ENV1 SUBJECT TO THE AVAILABILITY OF RESOURCES, THE COUNCIL WILL ENCOURAGE AND INITIATE ENVIRONMENTAL IMPROVEMENTS.

J12 W FEASIBLE AND IN APPROPRIATE LOCATIONS THE REFURBISHMENT OF INDUSTRIAL PREMISES FOR CONTINUED INDUSTRIAL USE WILL BE ENCOURAGED EXCEPT W IT WOULD BE TO THE DISADVANTAGE OF EXISTING INDUSTRIAL ACTIVITIES.

Planners have satirized this aspect of their work with the term "Bomfog': the aim of planning being to promote the Brotherhood Of Man and the Fatherhood Of God. Note the sexist bias of the joke: it satirizes the masculine approach to planning, as does McLoughlin when he describes the specialists as "chaps'. The existentialist philosopher Jean-Paul Sartre, who lived with the renowned feminist Simone de Beauvoir, had a broader view. Sartre believed that hard choices have to made about ways of living, because gaining all ends is impossible. He told of a young man who sought to serve in the army, to give time to his lover and to care for an ageing parent. The objectives were in opposition to one another -- necessitating an existentialist choice. As a Roman centurion wrote on a stone in the Western Desert: "There are two things in life: love and power. No man can have both.' Society faces dilemmas but does not have to make single choices. Individuals and groups can define their different choices with different plans. One may favour economic growth, another will favour environmental protection, another social justice. Sometimes, politicians will have to make compromises and planners will be able to offer advice, provided they have good information. A spatial database, or GIS, is the best method of holding, organizing, displaying and manipulating the necessary information.

A planning database should make data available to individuals and groups in society, giving them access to power. Everyone needs models of the present in order to formulate ideas about the future. Those who do not consider the future may not have one. The aim of this essay is to review some of the planning opportunities that GIS are making available. Old-fashioned plans were often dreary documents, filled with platitudinous beatitudes and dullish maps. The next generation of planning publications, if lodged on the Internet or released on compact discs (CDs), could be much more exciting publications, containing sound, photographs, video clips, text and dynamic maps. Consider the statistics. A typical planning document might cost ,30 and weigh 1 kg. It might contain 50,000 words, 50 photographs and 10 maps. Costing a mere 40p, little more than the postage stamp that should carry it into every home, a planning CD could contain a complete thematic atlas of the local area, a library of photographs, comprehensive statistics and as many words as the Bible. The nearest thing we have to this format, at present, is the compact disc encyclopedia. If you consult the map section of a CD encyclopedia, it is possible to click on a town, country or river and find information about population, history, famous buildings and so forth.

On the world wide web town plans can hold vast amounts of data - and can be updated hourly if required. They can also have write-access for citizens to post their comments on the 'official' plan, or to post their own plans.

The world that lies before us is multi-everything: nations, cultures, fauna, flora, arts, regions, ethnic groups and interest groups. Each has features that they wish to conserve and develop. With skill, many of their ideas can be fitted together. The terms zoning plan, local plan, development plan and land use plan, which remain popular in Europe, America and Japan, suggest uniform styles of sanitized development with International Style offices, housing, industry and roads. The plans that led to such misguided programmes were sometimes known as comprehensive development plans, or CDPs. In future these letters should be reserved for compact disc plans (Figure 6).

The benefits of GIS are likely to arise in every department of planning. As examples, we can consider planning for utilities, rivers, coasts, local character, minerals, forests and habitats. If comprehensive planning should ever return to favour, it will have to build upon plans produced by specialists. This is because the separate plans must exist before they can be integrated. Feudal lords had broader objectives than modern specialists, and comprehensive information about their own estates. GIS may bring back the comprehensive view, hopefully without the comprehensive power of the robber barons. They are also well suited to the planning of things that move

The would-be architect of modern Europe, leaving Moscow in flames 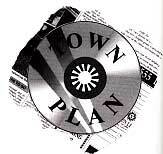 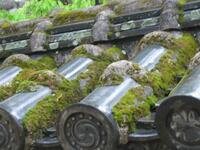