It is now accepted by almost everyone that the world evolved by slow degrees over an immense period of time. Geomorphological patterns result from the natural processes that made the world: heating, cooling, erosion, deposition, wave action, water flow, air flow and others. Some of these patterns can be seen with the human eye at ground level. We love to gaze at the sand patterns on a beach or the patterns formed by rocks (Figure 3.14). Sea birds, though all have the optical capacity to detect such patterns, will only "see' patterns if they are important to their feeding or breeding habits. Sylvia Crowe wrote about visible landscape patterns, as seen by humans, in The Pattern of Landscape (Crowe, 1988).

Other natural patterns can be detected with special equipment, including telescopes, satellites and microscopes. Remote sensing can reveal the distribution pattern of a mineral on the earth's surface. High-power lenses, used with polarized light, can reveal the internal patterns of rock crystals. The Hubble telescope (see image below) can photograph stars that ceased to exist before our sun came into existence. Geomorphological patterns are traces of the forces that made the earth and which continue to shape its evolution. Environmental designers benefit, functionally and aesthetically, from an understanding of geological patterns. 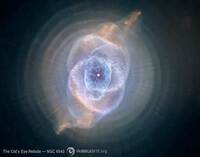