History and theory of garden design and landscape architecture > Garden and Landscape Books > Essays on Cities and Landscapes by Tom Turner - contents list > 19.2 The garden revolution of the 1790s

By the 1790s, the English landscape style, launched by Temple, had passed its zenith. Garden design had reached a logical impasse. Four generations of authors had written that gardens should imitate nature. Four generations of designers had followed their precept. Gardens had become ever wilder and ever more "natural'. So far had this process gone, that the garden had almost ceased to be a garden. It had become nature herself: wild, rude and unadorned. When there was no obvious way forward, most designers turned back - to the reproduction of ancient styles. This revolution, in the exact sense of "orbital motion', dates from 1793.

In that year, while England, Holland, Spain, Portugal and the Holy Roman Empire joined forces against revolutionary France, three English country squires advanced a gardening revolution. Sir Uvedale Price, Richard Payne Knight and Humphry Repton were propagandists for both the picturesque and The Picturesque. Written with the upper case, The Picturesque was an aesthetic category meaning wild, rugged and shaggy, to contrast with Burke's categories of The Sublime and The Beautiful. Written with the lower case, the picturesque was a way of organizing a garden, like a landscape painting, into foreground, middleground and background.

A logical impasse faced those gardeners who followed the Picturesque way. Loudon, a brilliant and fiercely energetic young Scot, travelled from Edinburgh to London at the age of 20. He became the leading garden writer of his day and, through Andrew Jackson Downing, a prime influence on American garden design. In 1804 Loudon declared:

I believe that I am the first who has set out as a landscape gardener, professing to follow Mr Price's principles. How far I shall succeed in executing my plans, and introducing more of The Picturesque into improved places, time alone must determine. (Loudon, 1804)

Loudon's lavish two-volume work on Country Residences, of 1806, was full of proposals for converting estates laid out in the manner of Lancelot Brown to "Mr Price's principles', which meant Picturesque wildness and irregularity (Loudon, 1806). Ill-health terminated his endeavour c.1810. But in the 1820s Loudon returned to landscape gardening, this time as an author with a full appreciation of the logical impasse. Drawing support from Quatremère de Quincy, a French neoplatonic philosopher, Loudon proposed that gardens in the irregular, or Picturesque, style should be planted with exotic species, to make them "Recognizable' as works of art that could not be confused with wild, rude and unadorned nature.

The other solution to the logical impasse was the picturesque, with a small p: the organization of gardens to form a transition. The Picturesque, with a large P, became absorbed as one stage in the transition, rather than a style in its own right. When writing a book on English Garden Design: History and Styles Since 1650, I chose to describe this method of organization as the Transition Style, because the fundamental characteristic was a "transition' from a Beautiful foreground, through a Picturesque middleground to a Sublime background (Figure 19.2) (Turner, 1986). If revising the book, I would call it the "Landscape Style', mainly because the organization was based on landscape paintings, but also because it brought together many of the design innovations of the eighteenth century English landscape movement. The style was extremely influential from 1793 until it was squeezed out of English gardens in 1947 by the Town and Country Planning Act. The act led to small gardens because it restricted the expansion of towns. 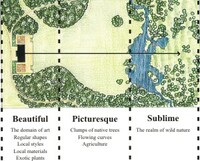