20.1 The place of ideas in garden design

Ideas have a central place in garden design. Physically, gardens must have boundaries. Mentally, they can reach to the limits of the known universe. The ideas that bestow such vast extent upon gardens derive from sun, earth, art, water, history, civilization, family, anything. This essay considers the inspiration that can come from sun, wind, materials, sculpture and the conservation movement. They were chosen as examples because, in the arts, it is often necessary to look backwards before travelling forwards.

The art of shadows

Orbital movement of the Earth causes the gradual and predictable travel of a shadow across the face of a sundial. Each sundial must be designed for an exact location, otherwise it will only reveal the dialler's ignorance (Figure 20.1). Adaptation to a precise location is a good principle in all garden design. The length of the shadow cast by a sundial's gnomon depends on the time of year, the latitude of the dial, and the position of the earth on its daily rotation. No two identical dials, in different gardens, will cast shadows in the same position at the same time. Sunlight itself is produced by the conversion of hydrogen to helium and takes 8 minutes to travel the 149.6 million kilometres from sun to earth. It is little wonder that dials induce contemplation. They were placed on church towers, because "time is a sacred thing'. When mechanical clocks became available, the demand for dials increased: they were needed to set the clocks. When other ways of setting clocks became available, many old dials were moved into vicarage gardens.

English sundials have been inscribed with mottoes since the beginning of the sixteenth century. Mrs Alfred Gatty, a parsons's wife, gave the reason:

What could be more natural to a scholarly and reflecting mind than to point the moral of passing time in a brief sentence which arouses thought. (Gatty, 1890)

She produced a book of sundial mottoes and wrote that

The great Creator, who made the sun to rule the day and the moon and the stars to govern the night, has adapted our nature to these intermitting changes, and implanted in us an immediate desire to count how, drop by drop, or grain by grain, time and life are passing away.

The oldest mottoes are in Latin and have a religious theme, often imbued with northern gloom:

MANEO NEMINI: I wait for no one.

SIC TRANSIT GLORIA MUNDIS: So passes the glory of the world.

The best-known motto, TEMPUS FUGIT, has become trite, but Thomas a Kempis' line from Imitatio Christi, the last example in the above list, has a majesty that is undimmed by repetition. So does St Paul's advice to the Ephesians:

SOL NON OCCIDAT SUPER IRACUNDIAM VESTRAM: Let not the sun go down upon your wrath.

Other mottoes are humorous, though most wit dulls after a few centuries in a damp garden:

Time wastes us all, our bodies and our wits;
But we waste time, so time and we are quits.
What is the time? come, why do you ask?
Is it to start, or to end your task?

Love of riddles and puns has touched the sundial. WE SHALL ____ is proclaimed by a number of dials. Should the possessor of a lively mind pass by, the words "dial' or "die-all' will come to her.

The idea of a dial engaging in conservation with the viewer is not uncommon. Dials generally have the best of it:

SOL ME VOS UMBRA REGIT: The sun guides me, the shadow you.

REDIBO, TO NUNQUAM: I shall return, thou never.

I AM A SHADOW, SO ART THOU.

I MARK TIME, DOST THOU?

It has been noted that the last motto in the list is "either totally useless or utterly false'.

Sundials can stimulate a child's interest in science and life. Mrs Gatty herself became interested in dials as a girl. Her father, the chaplain in whose arms Nelson died at the battle of Trafalgar, was the vicar of Catterick. It was a dial over the church door that awakened his daughter's interest in the subject. One can imagine the awe that the Latin inspired in the child's heart:

The sentiment reminds one of W.H. Auden's lines, which could grace a sundial:

IN THE TWILIGHT OF HIS DAYS, TEACH THE FREEMAN HOW TO PRAISE.

Clocks measure Mean Time, which is averaged to produce hours and days of equal length. Sundials measure solar time, which is equal to clock time only four times a year, on 16 April, 14 June, 2 September and 25 December, with slight adjustments for leap years. In between these dates, solar time will be up to 16 minutes before clock time or 14 minutes after. This is because the Earth follows an elliptical orbit and moves faster as it nears the sun. When the earth moves faster, solar time is ahead of clock time. To me, this is a fact worth knowing. Garden dials should be calibrated to reveal astronomical information. When slowing down, towards the end of a day's gardening, I would like to know whether the Earth is accelerating or decelerating. An adjustment table on the dial face would facilitate conversions from solar time to clock time.

Because clocks are also adjusted for Standard Time Zones and perhaps for Daylight Saving Time, they do not often tell the true noon. I like to know when the sun has reached its zenith and the garden is at its brightest on a particular day. A noon mark is the simplest way of telling the sun's zenith. It can be a straight line on a level surface, along which the shadow of a vertical pole falls at noon. Such marks were once drawn on window sills, to catch the shadow of a glazing bar. They were also placed on level lawns, utilizing the shadow of a flag pole. A noon line could be an awesome starting point for a garden layout. It can be marked by recording the shadow of a plumb-line at the instant of local noon, or by using a compass and making an adjustment to find true north. If a horizontal pole with a small plate at the end is fixed to a vertical wall, it can mark the local noon and be read from a distance. 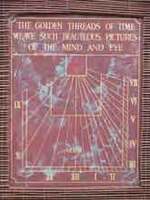 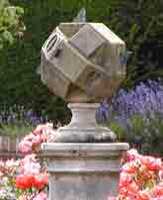 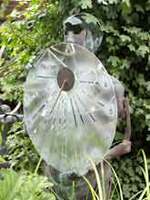