The advent of "urban design' signifies a welcome retreat from unitarism, which could discourage people from thinking of "planning' as a unitary professional discipline. When Frederick Gibberd wrote a book on "town design', it was pretty clear what he meant: architecture writ large (Gibberd, 1967). Just as architects planned rooms and corridors, so, it appeared to Gibberd's generation, they could plan land uses and roads (Figure 11.4). Architect means "head technician', and architect-planners aimed to control all the subsidiary specialists. In "urban design', the substitution of the adjective "urban' for the adjectival noun "town' implies a less-than-holistic activity, just as "aerodynamic design' and "structural design" describe aspects of aircraft or building design. But many popular theories of urban design still tend to unitarism. The theories of Bacon, Hillier and McHarg can illustrate the point.

Edmund Bacon wrote an exhilarating book on the Design of Cities (Bacon, 1967). The illustrations, especially, lead one to believe that a great city requires a "design structure' linked to a "movement system', like the corridors in a building (Figure 5). Though it is easy to be swept along by the historical analysis, the argument and the drawings, one should grip the handrail. Not all good urban open space has been, should be, or can be designed in this way. Bacon's approach focuses on urban set-pieces, of the kind loved by priests, kings and generals. Democratic societies, having deposed their former masters, should think twice before giving similar powers to municipal planning departments. Bacon proposes "shafts of space', which are in danger of becoming processional routes without processions. Dictators plan avenues, put a presidential palace at the head of the avenue and then organize processions to celebrate their glory. It is an approach that privileges abstract visual space over useful social space. It does not produce spaces with other qualities for other activities: recreation space, entertainment space, ecological space, healthy space, sheltered space, market space, spiritual space or defensible space.

The theory of Space Syntax, as propounded by Hillier and Hanson, is also based on geometry (Hillier et al., 1984). The main idea is that central spaces, with good links and good views, will receive more use than peripheral spaces without good linkage. Centrality is computed from a range of geometrical measures, including relative asymmetry, convexity and axiality. Relative asymmetry is a measure of the depth of a place within the circulation system. Central places have low relative asymmetry. It is claimed that when these values are right, the spaces will be more central and more used (Figure 6). One can hardly dispute the fact that the centre of a network will be more intensively used than the periphery, but is intensive use always good? Oscar Newman, in a book on Defensible Space, argues that if strangers are always walking past your door, the space will not be defensible and crime rates will be high (Newman, 1973). The two theories met head on in the cul-de-sac. Space Syntax theorists are against them, because they discourage pedestrian access. Defensible space theorists are in favour of them, because they discourage pedestrian access. Both theories are correct, but err in striving for unitarism.

Ecologists and environmentalists tend to another type of unitarism, which seeks to privilege the natural environment over the human environment. Ian McHarg, in Design with Nature (McHarg, 1971), used a set of drawings (Figure 11.7) that are quite as seductive as Bacon's to argue that planning should begin from a consideration of natural environment characteristics (earth, water, air, vegetation, wildlife). As a counterweight to normal practice, it was an excellent book. But there is a serious contradiction in the meaning of "nature' in this context. If man is part of nature, as just another animal, then the theories have no meaning. If man is a separate force, accused of damaging nature in his own interest, then these theories are opposed to human life and can hardly be expected to help in creating a home for man.

A feature common to most theories of urban design, which explains their unitarism, is their genesis in the constructive professions. As discussed above, engineers, architects and landscape designers are trained and paid to recommend particular courses of action for particular purposes. Their habit is deeply ingrained, and there are hierarchical relationships between the professions. Planners, at least in planning theory, are the "conductors of the orchestra'. Road engineers take precedence over architects. This has been a deadly constraint on housing layout. Architects hold sway over landscape designers. This has been a deadly constraint on "the space outside buildings'. Landscape designers aim to rule over horticulturalists, which has led to drearily uniform planting.

Fig 11.4 Frederick Gibberd wrote a book on Town Design and thought towns could be designed much like buildings with rooms (‘neighbourhoods’) and corridors (‘roads’). This is his plan for Harlow New Town, where he lived and worked.

11.5 Bacon believed that great cities have a 'design structure' 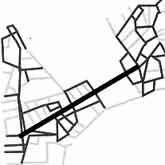 Fig 11.6 The ‘space syntax’ theory predicts use intensity from spatial geometry. In this example, the darker lines are predicted to be the most used – because they are the most central. 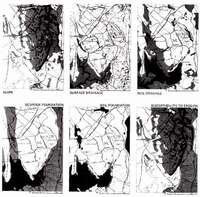 11.7 McHarg argued that we should 'design with nature'