In the urban environment, deconstruction has the potential to be a great force for good or ill. It could be the critical generator of a new approach to urbanism, or it could be a new Parisian terror. The latter prospect is raised before us by the deconstructionist slogan Il n'y a pas de hors-texte. The architectural cousin of this obscure principle, phrased in English to make horror plain, would be: "There is nothing outside the building' or "The context does not exist'. In architecture, deconstructionist ideas are being misused as an excuse for the design of buildings in isolation, divorced alike from internal planning and external context.

In origin, deconstruction was a way of reading philosophical texts, not a design or planning theory. But new ways of thinking and seeing inevitably lead to new ways of designing, as did Renaissance perspective. Jacques Derrida started from the Lévi-Strauss argument that, in language as in geology, deep structures lie beneath surface structures. He then challenged, or deconstructed, the relationship between structural elements. Feminists have taken a special interest in deconstruction because it offers a way of examining, and then upsetting, the traditional relationship of dominance in the Man:Woman structural pair. A deconstructive reading of the environment can be deployed, with parallel intent, to examine and upset the hierarchical relationships between land use activities and between the constructive professions. This may require, as in Bernard Tschumi's project at Parc de la Villette, deconstruction of the tradition by which the form of a building is subordinated to the function. Despite the modernist design theory that forms should be derived from functions, there are a great many successful buildings where the present function came long after the present form. Georgian houses have become offices and Victorian warehouses have become residential lofts. Geoffrey Broadbent maintains that 70% of building functions can be housed in 70% of building forms (Broadbent, 1988). If true, this is an excellent reason for deconstructing the traditional relationship between form and function. As a contrary policy, one could design buildings according to environmental criteria and worry about functions later on.

In the built environment, deep structures and their hierarchical relationships have been brought to the surface, as a crude artificial language. Instead of the easy transitions that characterize the natural environment, we have demarcated the most ridiculous strips and parcels of land for Road, River, Housing, Open Space, Industry, Shopping, Recreation, Forestry, Nature Reserve. In the following structural pairs, the first member is normally dominant:

Technical, legal and linguistic devices are used to subjugate the second party. Everywhere one looks, there are supposed deep structures that have been raised to the surface and translated into a crude artificial language, more suited to computers than humans. Land uses are put into parcels. Everything must be A or not-A, B or not-B. Boundaries are made into binary divides. The fantastic workings of the living organism are severed by the butcher's knife, as in Tunnard's montage (Figure 11.8). Smooth transitions are forced into culturally imposed formal structures. Happy is the river that is not a property line and not an engineer's "watercourse'. Sad is the river that becomes a municipal boundary, neglected by adjoining authorities. Tragic is the river that is buried by the constructive discourse of engineering .'

The constructive professions must be fluent speakers in the languages of the environment. An ability to say "road' or "river' in a dozen ways is good, but it is not enough. Professionals must be able to use languages, comprising words, drawings and numbers, which can embrace roads, rivers, forests and buildings in a myriad of ways, according to contexts and according to clients. They must have views on what to say and how to say it. Traditional planning moves down the hierarchy from engineering to architecture to planting design. Deconstructed approaches to urban design proceed in different ways. One could move from ecology to forestry to river design to architecture to highway engineering. Or one could move in another sequence, starting with the hydrological cycle. It is not a question of asserting new hierarchies. Women should not have the legal or moral right to dominate men, but they should enjoy equality of opportunity. Control should not be taken from engineers or planners merely to place farmers, ecologists or architects at the top of a new professional hierarchy. Instead, different hierarchies should be allowed to achieve different objectives in different places. Traditional relationships should be deconstructed. Those imagined deep structures, which currently disfigure the built environment, are human constructs.

Planners and designers should encourage as much diversity in human habitats as they find in animal habitats. It is not possible to resolve all conflicts or to gain all ends. Choices have to be made. Different aspects of the public good should be stressed in different places. To achieve variety in land use patterns, there should also be a variety of relationships between the professions, not an institutionalized decision-making tree. Relationships between the constructive professions should, therefore, be deconstructed. 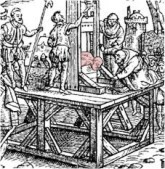 Fig 11.8 Landscapes should not be severed with the butcher's knife (from Tunnard's Gardens in the Modern Landscape)