History and theory of garden design and landscape architecture > Garden and Landscape Books > Essays on Cities and Landscapes by Tom Turner - contents list > 10.1 Context and Design

My grandfather, who was 18 in 1900, worked for the Central Telegraph Office in the City of London (Figure 10.1). Though one of the most high-tech offices in the world, it was a conformist place. As he used to say, coal was black and shirts were white. He dreamed of a brave new world in which not only the rich could go university, in which young men could take off their jackets on hot afternoons, and girls could go to bed with the men they loved. The houses in his street were all the same, with dark interiors and small paved yards. When Regent Street was rebuilt, between 1905 and 1930, he thought it wrong that all the building owners were forced to conform with a neoclassical plan. Young architects of his generation also dreamed of a brave new world. They wanted light interiors, functional exteriors and an end to the Victorian preoccupation with external style. By 1978, when my grandfather died, these dreams had come about, yet he and most non-architects disliked the new architecture of the new age. It lacked character. It ignored context. It oppressed the individual.

Designing buildings from the outside in, as the Victorians had done, produced consistent facades and drab interiors with parlours glaring across narrow streets at other parlours. Designing buildings from the inside out, as the brave new functionalists did, produced bright interiors with incoherent facades. Despite the rhetoric, external form had so little connection with internal function that, as Jencks relates of Mies van der Rohe's work for the Illinois Institute of Technology, a boiler house could be mistaken for a chapel and a chapel for a boiler house (Jencks, 1991). Many critics and designers now state that architecture should relate to context, but we lack theory on how to establish satisfactory relationships. It is said that buildings should "fit in' with the character of their surroundings. This appeals to the public but is perplexing and rather depressing for those who toil at drawing-boards.

Was planting the date palm a good design idea?

10.1 The Central Telegraph Office was a very conformist place, down to the last moustache 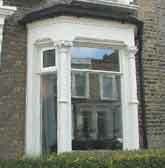