parks, bridges, quarries and every other type of development that will have a significant impact on environmental quality (Figure 2). Several positions can be adopted:

1. Context is irrelevant. As the man who built his house upon sand discovered, this approach lacks prudence.

2. Context matters functionally. This concerns the inward impact of contextual factors upon development. Relevant considerations will include ground stability, humidity, rainfall, temperature, security and many others.

3. Context matters environmentally. This concerns the outward impacts of development upon context. They may be beneficial or harmful, and will include impacts on air, water, soil, plants, animals and humans. Pollution is sometimes used as a collective term for these impacts.

4. Context matters aesthetically. This concerns both inward and outward visual relationships between development and context. The range of considerations will include materials, colour, mass, line, pattern, shape and views. Sometimes, these are said to be private concerns rather than matters of public policy, because "beauty lies in the eye of the beholder', or because individuals should be monarchs on their own land. But if one wants a visually coherent environment, there must be principles upon which to act.

Traditionally, architects have worked in the style of their own times (Figure 10.3). Today, environmentalists urge planners and designers to respect context and "minimize' the impact of development projects on the environment. This plea appears reasonable but is muddled. When farmland is urbanized, moorland afforested, or deserts reclaimed, the whole purpose of the exercise is to produce an impact on the environment. Minimizing that impact would be counter-productive. You might argue that the world is overdeveloped and no further changes should be allowed, but this position will not command support so long as there are poor people who need more food and living space. Do their demands make continued environmental despoliation inevitable?

Fig 10.2 Roads, like other types of development, should respect their context. The cartoon shows a modern road insulting an Olde Inn

Where is this road? Texas 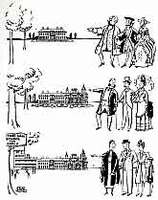