History and theory of garden design and landscape architecture > Garden and Landscape Books > Essays on Cities and Landscapes by Tom Turner - contents list > 10.4 Climate and Context

Had a nineteenth century explorer visited Iceland (Figure 7) and Arabia (Figure 8), he would have found settlement patterns that related to the local climates. In Iceland, he would have found isolated low buildings with thick walls and sloping turf roofs. There was no advantage in placing buildings together and there was considerable advantage in placing them in the midst of agricultural holdings. In Arabia he would have found high buildings with flat roofs packed close together for defence against marauders and against the sun. A late twentieth century traveller visiting the same places would find astonishingly little difference between the urban morphology of Iceland and Arabia. One cannot help regretting that architects and planners have paid so little attention to Vitruvius' advice, from Rome in the first century AD:

If our designs for private houses are to be correct, we must at the outset take note of the countries and climates in which they are built. One style of house seems appropriate to build in Egypt, another in Spain, a different kind in Pontus, one still different in Rome, and so on with lands and countries of other characteristics. This is because one part of the earth is directly under the sun's course, another is far away from it, while another lies midway between these two. (Vitruvius, 1914 edn)

Within countries too, there is great advantage in attending to the climatic context of development. Individual buildings should be sited to create desirable climatic conditions in outdoor space, with varying degrees of shade, sun and shelter. When the building shown on the cover of this book was proposed, the designers likened the space at its foot to Trafalgar Square. I predicted, correctly I am sorry to say, that its climate would be more like Cape Trafalgar, where the sea battle took place (Turner, 1987b).

Climate and orientation were special concerns of Humphry Repton, the great landscape theorist (Repton, 1816). His interest was in the English lowlands, but he considered the problem very carefully, declaring that "I consider the aspect as of infinitely more consequence to the comfort and convenience of the inhabitant than any prospect whatever'. By aspect he meant orientation. By prospect he meant views. The principle that Repton advocated was to orientate the best rooms to the best aspects and the best views. This may seem obvious, but Repton remarked that in his long experience it is more difficult than "all the rules which have ever been laid down in books by architects, or the remarks of all the admirers of rural scenery, with whom I have ever conversed'. Repton's advice on aspect was as follows:

Due north is "apt to be gloomy, because no sunshine ever cheers a room so placed'.

Due east is "not much better, because there the sun only shines while we are in bed'.

Due west is "intolerable, from the excess of sun dazzling the eye through the greatest part of the day'.

Due south is "most desirable'.

South east is "the best'.

South west is "the worst of all possible aspects' because "all blustering winds and driving rains come from the south-west'.

North west "is far better than either due north or due west, because some sunshine may be preserved, when its beams are less potent... and the scene will be illuminated by those catching lights so much studied by painters'.

North east "is objectionable, during the cold winds of spring'.

In discussing these principles, Repton explained that they should be modified according to local circumstance, topography, planting design and the habits of the occupants. It would be wonderful if modern house builders had an interest in aspect and prospect, and were willing to adapt their designs according to local climates. In the great majority of modern housing layouts, room orientation is fixed by a road layout, a standard house plan, or both. This decreases the pleasure of living and increases the cost of indoor heating and cooling. As the sundials say, Sic transit gloria mundis. 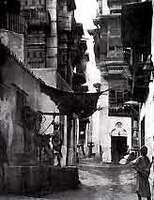