Alexander's East Coast solution to the problem of complexity in design dates from the 1960s, when electronic computers first became generally available. It seemed that well-programmed impersonal machines could take the place of fallible masters with a zest for tyranny. Maybe the computers could even become superior masters. Alexander's Notes suggested that large-scale forms could be synthesized after analysing large problems into small problems, so that they could be picked off one at a time. Appropriately, the first example was a vacuum cleaner. The design problem was divided into a series of binary relationships (for example, between "jointing and simplicity' or "performance and economy') so that they could be dealt with. The largest example was the determinants of form in an Indian village. They were broken down into 141 components and classified as religion, social forces, agriculture, water, etc. Here are seven of the 141 components:

Before anyone takes offence at "women gossip' as a "design problem', it should be noted that the list contained both design objectives and design problems. The full sequence was described as a tree of diagrams (Figure 3.2).

Two years later, Alexander had a change of heart and published his seminal essay "A city is not a tree' (Alexander, 1966). By "tree' he meant a hierarchy. Alexander emphasized that cities are not hierarchies, and that when planners believe they are, they produce the horrors of "planned towns' with road hierarchies, business areas and useless open space. The example of a bus stop was used in "A city is not a tree' to show that a bus stop is not merely a stage on a bus route. It also figures in patterns of shopping, walking, waiting, talking etc. These considerations led Alexander to argue against artificial cities and in favour of organic cities. He stated that cities are semi-lattice structures, not tree structures. As shown, the argument can be taken further (Figure 3.3, below). The city is not a tree. It is not even an object. It is a set of landscapes. Every characteristic overlaps a host of other characteristics. Thinking about city structure led Alexander to recommend a second approach to the problem of complexity in design. 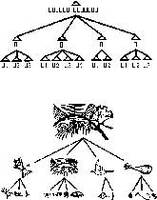 3.2 The synthesis of form, for an Indian village (based on Christopher Alexander’s diagram

Fig 3.3 ‘A city is not a tree’. It is a landscape. The top four diagrams are based on Christopher Alexander. The lower two diagrams, by Tom Turner, show that the ‘semi lattice’ of urban structure needs to be related to the lattice of the existing landscape (shown in green).