History and theory of garden design and landscape architecture > Garden and Landscape Books > Essays on Cities and Landscapes by Tom Turner - contents list > 3.14 A pattern classification for planners and designers

3.14 A pattern classification for planners and designers

The foregoing examples, selected from different fields of knowledge, can be conceived as structures. But for designers, "pattern' is a more natural term than "structure'. Patterns are of different ages and can be classified, like geological formations, using the terms Primary, Secondary, Tertiary and Quaternary (Figure 3.17, below). The sequence of this classification is dictated by the following considerations: primary patterns existed before man; secondary patterns, as traces of Stone Age man, are the oldest signs of human life on earth; some tertiary patterns, like cave paintings, are very ancient; quaternary patterns are more recent. The foregoing types of pattern can therefore be grouped as follows.

Primary/Natural patterns are found in the existing landscape, resulting from flows of energy, from geology, from the nature of materials, from the processes of growth and decay. They might be represented in words and numbers, but maps and drawings are likely to be the most useful format. McHarg's map overlays represent the primary patterns of the existing landscape (McHarg, 1971). The emerging patterns of landscape ecology are of great importance (Forman and Godron, 1986). Dame Sylvia Crowe's book, on the Pattern of Landscape (1988), considers natural patterns from both geomorphological and aesthetic points of view.

Secondary/Human patterns are found in the urban and rural landscape. They result from the behaviour of humans, who adapt places to satisfy needs for food, shelter, transport, comfort and security.

Tertiary/Aesthetic patterns result from the artist's imagination or the aesthetic appreciation of nature. They may derive from geometry, mathematics, decoration, representation, mythology, symbolism, allegory, metaphor, abstraction, philosophy, poetry, music and narrative. There are creative artists with expertise in all these areas. Environmental designers can work with them and learn from them.

Quaternary/Archetypal patterns are tried and tested combinations of the other patterns. They are prototypes that have proved successful, like plant associations, house types, farm types and settlement types. Their place in outdoor design, which is a site-specific art, is as components. Like a sundial, no outdoor design can be exactly right for more than one point on the earth's surface.

Alexander's Pattern Language is made of quaternary patterns. The following examples draw upon primary and secondary patterns: Pattern 64, Pools and streams, arises because "We came from the water; our bodies are largely water; and water plays a fundamental role in our psychology'; Pattern 168, Connection to earth, arises because "A house feels isolated from the nature around it, unless its floors are interleaved directly with the earth that is around the house'; Pattern 74, Animals, states that "Animals are as important a part of nature as the trees and grass and flowers', and there is evidence that "animals may play a vital role in a child's emotional development'.

The Pattern Language aims to avoid tertiary/aesthetic patterns, though some of them clearly do involve visual judgements. Pattern 249 states that "All people have the instinct to decorate their surroundings'. Pattern 235, Small panes, recommends users to "Divide each window into small panes' because "the smaller panes are, the more intensely windows help connect us with what is on the other side'. The subject will be discussed in a forthcoming book on the Nature of Order and is previewed in a 1993 book on the colour and geometry of very early Turkish carpets: A Foreshadowing of 21st Century Art. He finds in carpets "what the work of Bach and Monteverdi is in the world of music -- a realm of pure structure, in which the deepest human emotions have their play' (Alexander, 1993). Yet carpets deal almost entirely with pattern and ornament. They are an exercise in colour and geometry.

The hidden strength of the Pattern Language lies in its imaginative appreciation of secondary patterns. They redirect designers' attention away from style and back towards human behaviour. For example, Pattern 119 values arcades because they "play a vital role in the way that people interact with buildings'; Pattern 164 recommends street windows because "A street without windows is blind and frightening', and because "it is equally uncomfortable to be in a house which bounds a public street with no window at all on the street'. Some of the patterns derive from what an earlier generation of psychologists would have called instincts: Pattern 181, Fire, observes that "The need for fire is almost as fundamental as the need for water'. Pattern 129, Common areas at the heart, states that "No social group -- whether a family, a work group, or a school group -- can survive without constant informal contact among its members.' The converse of this proposition is (Pattern 141, A room of one's own): "No one can be close to others, without also having frequent opportunities to be alone'. The proposal for a teenager's cottage, in Pattern 154, seems part of an initiation rite: "To mark a child's coming of age, transform his place in the home into a kind of cottage that expresses in a physical way the beginnings of independence'. 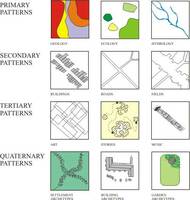