The study of animal behaviour developed in the first half of the twentieth century, with Conrad Lorenz as the pioneer. He applied the systematic methods of comparative anatomy to the study of animal and human behaviour. This subject became known as ethology. Lorenz' early work was on the process of imprinting, by which young geese learn to follow their parents. Later, he argued that animals are genetically constructed to learn other behaviour patterns that are important for their reproduction and survival.

Much can also be learned about human nature from the study of observable behaviour patterns. Lorenz published a book On Aggression in humans and animals (Lorenz, 1963). He speculates as to what conclusions might be drawn by a Martian who could observe human behaviour only through a telescope. Detailed behavioural studies, which are a way of studying the mind "from the outside', have since had an impact on design and planning. It has, for example, been discovered that:

Such behaviour patterns, which can be verified either by personal observation or by systematic data collection, are essential knowledge for those who plan outdoor space. 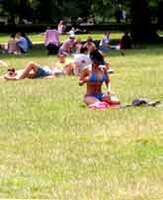