The gardens made by Timur, in Uzbekistan, were the means by which Persian garden design ideas were transmitted to India. No physical examples of their planting survive. But there are several types of evidence (1) written accounts, such as that of the Spanish Ambassador (Clavijo) who wrote 'The garden where this festival took place is very large and it is planted with many fruit-bearing trees with others that are to give shade, and throughout are led avenues and raised paths that are bordered by palings along which the guests might pass on their way' (2) poetic references, as in Omar Khayyam (3) examples of planting as found in modern Uzbekistan. Where managed by flood irrigation, as it was in Timurid times, the typical planting in the parks and gardens of Samarkand and Bukhara continues to be orchards with flowers and raised paths, as the photographs on this page show. The word bagh, used to describe these places, meant both orchard and garden.

Babur, born in the Ferghana Valley of Central Asia, compared his homeland with growing conditions on the plains of North India: 'In Hindustan hamlets and villages, towns indeed, are depopulated and set up in a moment!... if they fix their eyes on a place in which to settle, they need not dig water-courses or construct dams because their crops are all rain-grown, and as the population of Hindustan is unlimited, it swarms in. They make a tank or dig a well; they not not build houses or set up walls' ( 486-7 Babur-Nama, trans A S Beveridge). The distinction is significant:

Pleasing the eye and cooling the air were additional benefits of irrigation channels, allowing them to become decorative features - as they had been in Persia at least since the time of Pasargadae and quite possibly in Ancient Mesopotamia. 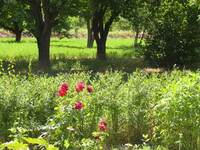 An orchard, with roses (outside Bukhara) 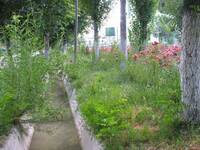 Trees with canal and rose underplanting (in Samarkand)