Fruit and flowers in Mughal and Hindu charbagh gardens 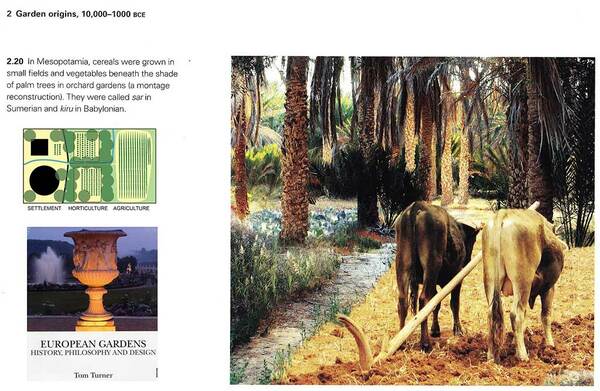 Hypothetical garden origins in Mesopotamia See diagrams for the evolution of 'palm orchard gardens' into sophisticated Mughal gardens. This garden type was brought to India by Muslims and was also used by Hindu rajas and maharajas.

The Islamic tradition of planting gardens in South and West Asia have ancient roots, reaching back thousands of years before the birth of Islam in the 7th century of the Common Era. The layout of charbagh ('four-gardens') probably began in Mesopotamia. In the flood-plain of the Tigris and Euphrates rivers canals were used to conduct irrigation water from rivers to places where plants were cultivated. This required a feeder channel leading from the river and distributor channels at right angles to the main channel. Modern irrigation systems also use this geometry, with pipes instead of open channels. Agricultural crops were grown in fields. Horticultural crops benefitted from walls and vegetables were often grown on irrigated land beneath date palms to provide some shelter from the sun. Vegetables need a lot of attention so the best arrangement was for plots to be near dwellings. It was best to have the house on higher land, to keep it dry and free from floods, and to have the garden on lower land, so that it could watered by channels running from rivers. Walling the horticultural plot gave protection from hot winds, dust, grazing animals and hungry neighbours. Water channels, trees, and walls therefore had horticultural objectives. But they also created pleasant places for pleasure and recreation the alternatives being open fields, dusty streets and desert land. See note on Mughal Gardens.

As shown in the illustration below Hindu gardens were influenced by charbagh ideas. It is a painting of Lord Krishna watching the gopis (cowherds) bathe after having stolen their clothes. The famous incident, represented in thousands of paintings, is the shown here in a charbagh style garden with the lush planting such gardens are likely to have had in both Islamic and Hindu charbaghs: flowers, fruits and trees.  One can imagine this garden scene in the Hindu charbagh on the terrace at Bundi Palace. 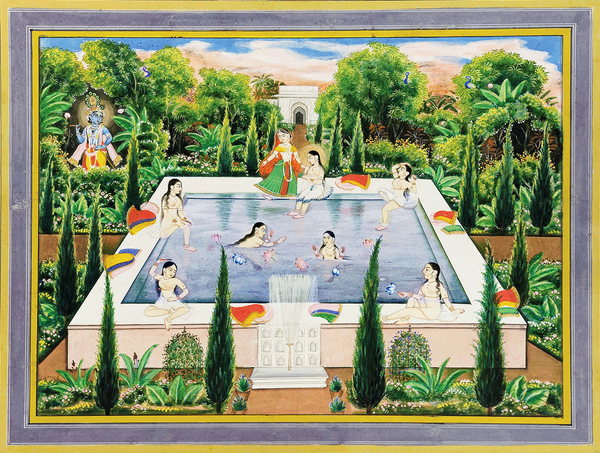 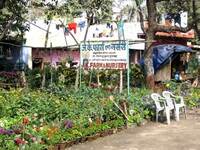 A plant nursery in Agra, giving a better idea of Mughal garden planting than the Taj Mahal 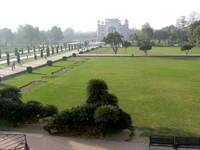 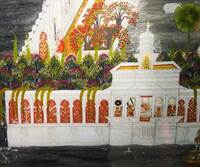