Western authors write books about the 'Great Mughals', often without explaining wherein their greatness lay. Indian authors regard the Mughals as cruel despots who exploited the Hindus, destroyed their temples and stole their wealth. Use of the adjective 'great' implies disagreement with the Indians.

Mughal rule in India lasted from 1526 to 1857 and the period of the first six emperors (1526-1707) can be seen as greater than their successors' time in two respects (1) it was a period of expansion (2) the artistic achievments were superior. Yet the Mughal kings were cruel, sybaritic and excessively self-important. Their tombs are set in gardens. Respected as shrines they survive in good condition and are the places most deserving the appellation 'Mughal Gardens': (1) they are unique as a garden type (2) they represent both their creator's nomadic past and their desire to settle (3) they epitomise the artistic and dynastic spirit of the Mughals.

Babur (1483-1530) Buried in his Agra garden (believed to be the Ram Bagh) though his body was moved to the Bagh-e Babur in Kabul. Babur was a warrior prince, trained from birth to rule as much territory as he could seize. He was moderate in his appetites, a reluctant husband, a keen naturalist and a lover of gardens.

Humayun (1508-1556) Buried in a tomb garden in Delhi. Humayun shared his father's tastes but not his moderation. Nor did he have a military talent. He loved art, gardens, food, alcohol, opium and women.

Akbar (1542-1605) Buried in a tomb garden at Sikandra, outside Agra. Akbar had a ruthless military talent and wide cultural interests. He built a new capital at Fatehpur Sikri. His biography is stomach-turningly fawning.

Jahangir (1569-1627) Buried in a tomb garden at Shahdara, outside Lahore, Pakistan. His name, adpoted when he became emperor, means 'seizer of the world' but more of his life was spent seizing food, drugs and women. He had an artistic sensibility and left a readable memoir of his life.

Shah Jahan (1592-1666) Buried beside his wife in the Taj Mahal, Agra. Like the best of his family, Shah Jahan had both military and artistic talents. He became emperor in 1627 but after his wife's death 4 years later, bearing their fourteenth child, he devoted his energies to building her tomb. The last years of his life were spent as his son's prisoner, in Agra Fort.

Aurangzeb (1618-1707) Buried in a simple tomb with no mausoleum, at Khuldabad, outside Daulatabad. Aurangzeb was a third son, a religious bigot and a crafty military leader. He had to imprison his father and kill his brothers to obtain the throne. Most of his life was then spent in fruitless warfare. 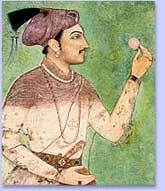