Mughal encampment gardens were formed on Timurid lines. The court needed the protection of an army when travelling from place to place and it was pleasant to have good camp sites on the route, gardens serving this purpose well. The pavilion was a place for the emperor to sleep. Canals provided water. Planting provided succulent fruits and refreshing scents. In addition to being places of resort and residence, the Shalimar Bagh gardens on the Grand Trunk Road, outside Delhi and Lahore, could be used to assemble a caravan before its departure. Babur left the following account of how he selected the site of what is believed to be the Ram Bagh in Agra:

I always thought one of the chief faults of Hindustan was that there was no running water. Everywhere that was habitable it should be possible to construct waterwheels, create running water, and make planned, geometric spaces … I crossed the Jumna with this plan in mind and scouted around for places to build gardens, but everywhere I looked was so unpleasant and desolate that I crossed back in great disgust.  Because the place was so ugly and disagreeable I abandoned my dream of making a charbagh. Although there was no really suitable place near Agra, there was nothing to do but work with the space we had. The foundation was the large well from which the water for the bathhouse came.

Babur thus explains a key feature of Mughal gardens. Their predecessors, in the lands which are now Uzbekistan and Afganistan, were fed by rushing water from the mountains. This being impossible on the flat plains of North India, the gardens had to be supplied with water drawn by oxen from deep wells. Water had to be conserved. Channels could only have shallow falls. They were formed on raised walkways with the space on either side used for fruit and vegetables watered by flood irrigation. See note on Mughal planting design. Raised walks protected visitors from snakes and vermin. They could be spread with carpets and protected from the sun by canopies.

See note on The Golden Road to Samarkand for the context in which Timurid-Mughal gardens originated. 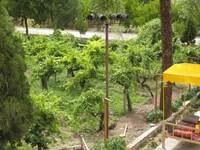 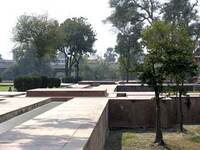 The Ram Bagh in Agra has raised walks with water channels. They were used to spread carpets above the mud insects and snakes at orchard level. 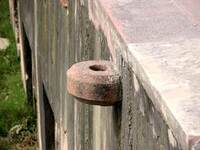