Following the Arab conquest of West Asia, both Byzantine and Persian craftsmen were employed. Under the powerful discipline of Islam a distinctively Muslim approach to architecture and gardens evolved. Geographically, it extended from the shores of the Atlantic to the Bay of Bengal, responding to local traditions and circumstances more than Roman gardens had done. Both domestic and religious outdoor enclosures were made. Byzantine influence was strongest in the design of religious space and Persian influence in the design of garden space. In India the two traditions were married to create the famous Mughal tomb gardens of the northern plains. Buddhist and Hindu temple design may have been the bridesmaids.

The Arabs were the people who fused the Roman and Persian traditions to create a new style, but the resulting architecture and gardens was largely the work of Roman and Persian craftsmen. The Arabs also encouraged the migration of Turkic peoples from Central Asia to West Asia. They were mercenaries at first but soon became conquerors in their own right, with the Seljuk Turks and then the Ottoman Turks gaining ascendancy over the Arabs. Arabic remained the language of Islam and of scolarship. The Arab script also continued in use over a wide area but it is difficult to identify a group of gardens as specifically 'Arab', rather than 'Islamic'. The gardens best deserving the title 'Arab Gardens' are perhaps those made in the North Africa and Southern Spain.

See gardens to visit in Syria 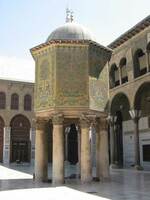 Photograph of the Great Mosque in Damascus