Water tanks and stepwells are characteristic of South Asia, particularly in arid monsoon climates. They may have originated in the Indus Valley. Their primary role is to store water from the rainy season for use during the dry season but they seem always to have had leisure and pleasure roles as well. In hot weather they are the coolest and pleasantest places to be. Tanks are shallow and may have no more than a rim. Stepwells have steps descending deep into the ground, fixed without mortar so that water can seep in from above the soil water level. The steps provide places to sit near the water and allow access, without a string and bucket, when the water level falls. The water is used for washing, drinking, bathing and irrigation. Women brought their children and washing to stepwells. They also prayed and made offerings to the goddess of the well. Some stepwells have temples and rooms built into their structure. There are ancient brick tanks at Mohenjo-daro and the oldest rock-cut stepwells (collecting surface water run off) India date from 200-400 AD.

The first stepwells are likely to have begun as natural areas where water collected, both in woodland and grass land. These would have been attractive places to build dwellings and the ponds would have been improved by deepening depressions and reinforcing their banks with logs, stones etc. There are textual descriptions of what may have been early stepwells in the Puranas. See note on Hindu gardens.

Indian temples can also have tanks known as kund (or pushkarini, kalyani, kunda, sarovara, tirtha, talab, pukhuri etc in various parts of India. They are used for ritual bathing before prayer and particular tanks are believed to cure particular ailments.

Most of India's stepwells are in disrepair. This is despite many calls for them to be cared for both as historic structures and for the contribution they make to water conservation objectives. Their neglect began with the discovery that tanks are great breeding grounds for the malaria mosquito (though the problem can be controlled by keeping fish in the water). See note on Multi-objective water conservation in India. 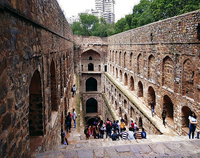 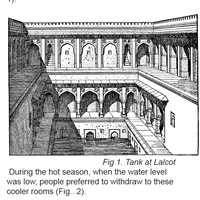