History and theory of garden design and landscape architecture > Garden and Landscape Articles > Sacred Space > Taoism, Nature and the Isles of the Immortals

Taoism/Daoism, Nature and the Isles of the Immortals

Taoism (or Daoism)  sees Lao Tzu, who lived c600 BCE, as its founder. He may not have been the sole author of the Tao Te Ching (or the DaoDeJing or Dao De Jing). The same point is made about Chuang Tzu and the Book of Chuang Tzu.  Confucianism developed in the context  of Taoism and folk religion. Chuang-Tzu (399 - 295 BC), writes of the Immortals. They are perfect beings who dwell in a far away place, celebrated in poetry and painting as the Isles of the Immortals (also known as the Mystic Isles or the Isles of the Blessed). The location of the Isles (Penglai, Yingzhou, and Fanghu) was in the Eastern Sea, off the Jiangsu (Kiangsu) coast of China. They became a favourite subject of Chinese and Japanese landscape painting. [See note below]

Daoism is simply the way the universe actually is. If you flow with its path, with the way of water, you will do well. Chinese medicine aims to rebalance the body. Action is inaction. Doing nothing is the most positive thing you can do. An emperor who brings in laws does so because he has failed. The earliest Daoist manuscript is 4th century BC. But logic leads us away from the Dao. It has been suggested that  that Buddhism is an offshoot of Daoism, filtered through non-Chinese minds. But Buddhists seek to escape from life and Daoists seek to prolong life. Also, in many respects Buddhism as an offshoot of Hinduism. The safest assumption is that Hindu, Buddhist and Daoist beliefs all have origins in Central Asia.

Taoism/Daoism emphasizes the search for longevity and immortality, a quest which can be assisted through diet, exercise, breathing, alchemy, ethical behaviour and travel to the Isles of the Immortals. The Dao is a principle that embraces nature, a force which flows through everything in the universe. Taoism encourages working with natural forces. This is represented graphically by the Yin-Yang diagram, a polarity which pre-dates organised Taoism. It is represented by  the Taijitu (the diagram of the supreme ultimate, ( å¤ªæžå›¾; Wade-Giles: T'ai Chi T'u; Pinyin: tài jí tú;). Yin and Yang first appear as the dark and light sides of a mountain. The Yang is active, masculine, and light. The Yang is is passive, feminine and dark. Heaven is active; the Earth is passive. The diagram shows the balance of opposites in the world of nature. Chinese medicine also emphasises balance. Yin and Yang are only mentioned once in DaoDeJing ( in which the De means power, as well as other things) It then grew gradually. Yin and Yang became  two interacting forces in nature, but with constant interaction. So the division is not static. It is a constantly moving balance. This was taken up by many Chinese thinkers from the 2nd or 3rd centuries.

8. 1. The highest excellence is like water. The excellence of water appears in its benefiting all things, and in its occupying, without striving, the low place which all men dislike. Hence (its way) is near to (that of) the Tao.

76. 1. Man at his birth is supple and weak; at his death, firm and strong. (So it is with) all things. Trees and plants, in their early growth, are soft and brittle; at their death, dry and withered.

3. Hence he who (relies on) the strength of his forces does not conquer; and a tree which is strong will fill the out-stretched arms, (and thereby invites the feller.)

4. Therefore the place of what is firm and strong is below, and that of what is soft and weak is above.

Quotation from the Book of Chuang Tzu

Now let me ask you some questions. If a man sleeps in a damp place, his back aches and he ends up half paralyzed, but is this true of a loach? If he lives in a tree, he is terrified and shakes with fright, but is this true of a monkey? Of these three creatures, then, which one knows the proper place to live? Men eat the flesh of grass-fed and grain-fed animals, deer eat grass, centipedes find snakes tasty, and hawks and falcons relish mice. Of these four, which knows how food ought to taste? Monkeys pair with monkeys, deer go out with deer, and fish play around with fish. Men claim that Mao-chi'iang and Lady Li were beautiful, but if fish saw them they would dive to the bottom of the stream, if birds saw them they would fly away, and if deer saw them they would break into a run. Of these four, which knows how to fix the standard of beauty for the world? The way I see it, the rules of benevolence and righteousness and the paths of right and wrong are all hopelessly snarled and jumbled. How could I know anything about such discriminations?"

The Isles of the Blessed are connected to the Taoist search for longevity and immortality. Their names were P'eng-La, Tai Yu, Yuan Chaio, Fang Hu and Ying Chou. The islands had high mountains, lush vegetation, misty valleys, blue rivers and the most delightful flora and fauna imaginable. Pleasure pavilions lined their shores. According to the traditional Chinese story, the islands drifted on the ocean until secured by 15 great turtles. But a giant captured six of them and the islands drifted away. The other three isles (P'eng-Lai, Fang Hu and Ying Chou) remained in the Eastern sea. The islands contained plants which could restore youth, mushrooms of immortality, waters of life and life-prolonging trees. In later Taoism they became allegories for a spiritual quest. It is possible that the legend relates to historic attempts to colonise Japan. The legend was taken up in Japan and Japanese gardens have turtle islands. 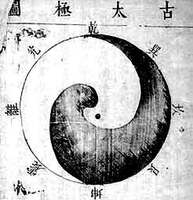