Rome drew massively upon Greece but much was changed in the process and adapted to local circumstances. Some of the contact with Greece came via the Etruscans, who made temples not unlike Greek temples but built in wood. None survived but there is a reconstruction in the garden of the Villa Giulia.

Roman religion centered on awe (religio), dutifulness (pietas) and spirits (numina). Together, they established a basis for relationships between family and state, codified in Roman law. Spirits were associated with places (homes, rivers, woods streams) and worshiped. Contact with Greece led to an identification of local gods with Greek gods and to the building of Greek-style Roman temples. Yet Roman religion remained more people-centric and shrines were built more in gardens and towns than in the countryside. The first shirine in Rome itself is said to have been in the Roman Forum. The courtyards of Pompeiian houses frequently have family shrines and there is a sacred grove with a grotto in the garden of Hadrian's Villa at Tivoli.

Being superstitious people, the Romans wanted to make offerings to local gods wherever they went. If the spirit of a locality did not have a name it was called the 'spirit of the place' or genius loci Calpurnius Siculus, for example, wrote: ‘Tum caespite vivo pone focum geniumque loci Faunumque Larsque salso farrre voca’ (Then set up a hearth of living turf and summon Faunus and Lares and the genius of the place with an offering of salad meal). There was a shrine to Faunus on the Tiber Island. 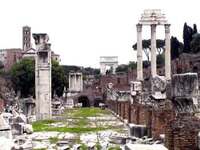