Kramrisch quotes from the Brhat Samhitā: 'The gods always play where lakes are, where the sun’s rays are warded off by umbrellas of lotus leaf clusters, and where clear waterpaths are made by swans whose breasts toss the white lotuses hither and thither; where swans, ducks, curleys and paddy-birds are heard and animals rest in the shade of Nicula trees on the river bank. The gods always play where groves are near, rivers, mountains, and springs, and in towns with pleasure gardens' (Stella Kramrisch The Hindu Temple, Volume 1 p. 4). Temples are therefore located in significant positions within landscapes. They are built in places that are already associated with the gods: on mountains, by rivers, in forests and beside gardens. Water is used for ritual washing before prayer and is a symbol of cleansing, renewal and enlightenment. The Buddhist and Jain faiths share many aspects of the Hindu approach to placing temples in landscapes.

The considerations in planning a Hindu temple relate to:

- Landscape. Diana L Eck undertook a geographical study of Hindu temples. In India: A Sacred Geography (2012) she explains that when writing a book on Varanasi (aka Banaras aka Kashi) she 'began gradually to understand what most Hindus who visit the city already know - that Banaras does not stand alone as the great centre of pilgrimate for Hindus, but is part of an extensive network of pilgrimage place stretching throughout the length and breadh of India. The very names of the temples, the ghats, and the bathing tanks of the city are derived from this broader landscape' (p.2).

- Architecture. The religious symolism that underpins temple planning developed in India but is easier to see in other countries that have been influenced by Hindu ideas. George Michell (in The Hindu Temple: An Introduction to Its Meaning and Forms), writes that outside India, as at Angkor Wat, there is 'a more concerted attempt to link architectural forms with cosmological and and other beliefs' (1988, p.159)

Since the tallest structure on a temple site (the sikhara) symbolises Mount Meru (the home of the gods), architecture and landscape are brought together by religious beliefs. 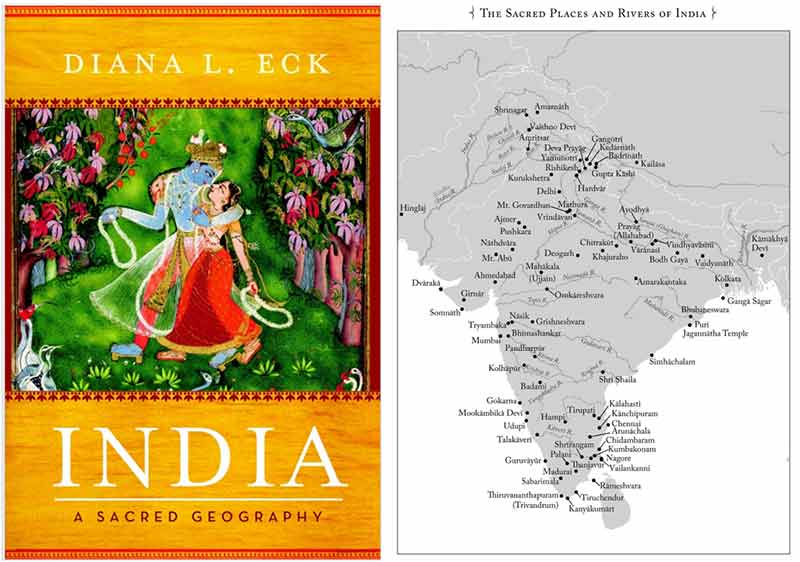 Diana L Eck geography of the sacred places of India (2012). The cover image shows a sacred scene: the god Krishna walking with Radha in a grove of a flowery forest.

Hindu Temple at confluence of two rivers in Nagpur 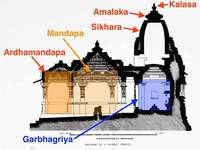