With the advent of Christian monotheism, the gods of old were condemned as ‘pagan’ (from pagus, a village or country district). An incident in The Life of St Martin, who died in 397 AD, records him speaking of ‘a moral necessity’ why a tree should be cut down ‘because it had been dedicated to a demon’ and of ‘the crowds of heathens [who] looked on in perfect quiet as he razed the pagan temple even to the foundations, he also reduced all the altars and images to dust’ . For centuries to come, the gods of old were treated as demons. During the renaissance pagan statues were dug up and placed in gardens.

Christian gardens turned away from the excessive luxury of Roman gardens and the greatest gardeners during the medieval period were monks and nuns. The types of garden they made included:

Cloister garth: typically a formal square of grass surrounded by a roofed arcade.
Cemetery orchard. The St Gall orchard cemetery would have contained tombs and fruit trees. The cemetery symbolised paradise and was also used for fruit trees.
Infirmary garden: used to grow medicinal plants
Green court: an area of grass and trees, used for grazing horses and other incidental functions
Obedientiary gardens: Obedientiaries (office holders - who were ‘obedient’) might have their own gardens private gardens for the prior and other office-holders
Cellarer’s garden: for growing vegetables and culinary herbs. Used for vegetables and other utilitarian plants (eg Covent Garden in London, which later became a vegetable market).
Herber. A small enclosed garden containing a lawn and herbaceous plants.
Vineyard. The Domesday Book of England records 38 vineyards.
Kitchen Garden. Used to grow both food and medicinal plants. 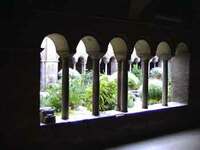