The renaissance garden, which Henry VIII made at Hampton Court Palace in the 1530s, was converted to the baroque style between 1660 and 1702. The garden (shown grass green on the plan) was laid to parterres and the deer park (olive green with canal) was furnished with a canal and radiating avenues.

In Tom Turner's opinion, a bad choice was made: it would have been so much better to have left the Privy Garden alone - and to have restored the Fountain Garden instead. The mistake arose through Simon Thurley using historical/administrative judgement instead of design judgement:

The Privy Garden used to have a romantic charm. It now looks pedanticly dull. Europe is full of rectangular parterres of this kind.  In 2001 the Privy Garden looked  pedantically dull. All the planting and construction is as authentic as it could be. This was a commendable historical achievement but much less of a design achievement.

The Fountain Garden is dominated by ugly, overgrown, mushroom-shaped yew trees which obstruct the key relationship between Hampton Court Palace and the Baroque deer park to the east. I cannot think of another example of a great semi-circular parterre in a magnificent location. Today, it is mainly from the plan that one appreciates the all-important relationship between the garden and the deer park.

The yew trees in the Fountain Garden remain (2001) as ugly as they have been for a century and still obstructing the key visual relationship between the palace and deer park. The Victorian flower beds are paltry - suited to small a public park but not to the greatest of Britain's royal palaces.

The Privy Garden and Fountain Garden 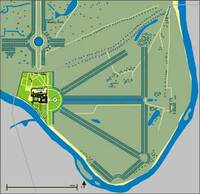 The yew trees in the Fountain Garden remain, in 2001