It is likely that certain places in particular landscapes were first considered sacred (in the sense of 'believed to be holy; devoted to a deity or used for a religious ceremony'). Demarcated with a line of boulders or an enclosing wall, these places became sanctuaries and were supplied with additional features: a statue of a god, a shelter for the god (a temple), a sacred lake and sacred trees. The term 'sacred grove' can be used for: 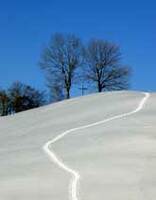