A Japanese garden has: 'exquisite arrangements of stone and moss, its manicured pines and dry streams, and above all its sense of being so perfect in itself that (as Mishima wrote) the visitor feels even the intrusion of his own senses onto the garden constitutes a violation'. [See webpage on Japanese garden design.]

A Chinese garden is 'confusing and dense, dominated by huge rock-piles and a great number of buildings all squeezed into innumerable, often very small spaces'.

Her explanation is that 'Chinese gardens are cosmic diagrams, revealing a profound and ancient view of the world and of man's place in it'. Yet they have also been:

Dream of the Red Chamber (see excerpt) was written by Ts'ao Chan (1715–63) and describes the life of a rich merchant. The garden he brings to life belongs to the scholar garden tradition which itself derives from the Buddhist tradition. Red stands for luck in Chinese culture.

It should be noted that much confusion about 'Chinese gardens' results from a failure to distinguish three types of space. In western terms they can be called [1] landscape parks [2] domestic courtyards [3] sacred gardens

China had parks during the Shang Dynasty (1766-1111 BCE) in which the scenery was as much valued as the sport. But these were not gardens in the modern sense - they were natural parks. The term 'hills and water' was similar in meaning to the western 'landscape'. The stones, an essential component of Chinese gardens, came from Lake Tai, near Suzhou, and became a feature of scholar gardens.

In the strict sense of 'enclosed outdoor space' the classic Chinese garden was a rectangular domestic courtyard attached to a dwelling. Even in neolithic times it was customary for a dwelling to face south and for settlements to be on a north-south axis. [See websites on Chinese courtyard housing and on Beijing courtyards]. The interest in orientation led, at a later date, to the art of feng shui. Courtyards were enclosed by buildings and, as at Pompeii, there were no windows on the outside walls and rich people had more than one courtyard. Richest of all, the Emperor of China had many courtyards with specialised roles - and he too used the design principles of strict geometry with a north-south axis. In winter sun entered from the south; in winter the sun was too high to gain entry.

The type of space which best merits the name 'Chinese garden' was the product of Confucianism, Taoism and Buddhism. Scholars used these ideas to make private gardens attached to their dwellings.

Confucianism is associated with the geometrical order of Chinese domestic and town planning. It grew out of China's ancient religion (ancestor worship) and was known as the Way of Heaven (see note on Shinto - the 'Way of the Gods'). Confucius (K'ung-fu-tzu or Kongfuzi, 551-479 BCE) believed study improved man, particularly that of the noble arts: rites, music, writing, mathematics, chariot driving and archery. These became the basis for educating the ‘good man’. They fostered the traditional Chinese virtues of sensibility, self-control and harmony between man and the universe – which equipped a man to serve the government. Bureaucrats were scholars. The diagram below show the Forbidden City in Beijing [Note1: the naturalistic areas within the Palace were made under the influence of Taoism and Buddhism, as described below. Note2: see Marco Polo's description of the Forbidden City in 1275 AD).

Taoism is linked to Lao Tzu but did not develop until 200 years after his death (itself dated between 600 and 300 BCE). The Tao is the inexpressible source of being, a divine principle which underlies the natural world. This evolved into a mystical religion which turned away from the artificialities and etiquette of Confucius. The good man was seen as one whose life rested on naturalness, not wealth or status. This became associated with a more natural approach to the design of gardens. Taoism was also associated with a search after the elixir of life, helped by journeys to the Isles of the Immortals in the Eastern Sea. The Isles became an important theme in Chinese art and, later, Japanese art. They fitted easily into the older theme of 'woods and water' painting.

Buddhism came to China from India (probably with merchants on the Silk Road). It was then adopted by the Emperor and transformed through contact with Chinese civilisation. This brought a monastic tradition to China though it was not necessary to join a monastery. Laymen could hope for nirvana if they lived as Buddhists - and nor did they have to deny the old religions. Two strands developed, with ten schools. Ching't'u (Amide - or Amanda - Buddhism) emphasised rebirth in the Pure Land of the West and Ch'an (similar to Japanese Zen Buddhism) emphasised meditation. Chinese gardens, like the rocks used to form them, were aids to meditation.

China had an assimilative attitude to religion. Confucian geometry was joined, through Buddhism and Taoism, to a mystical appreciation of nature in garden design. Buddhist monastries began making idealised landscapes and, it appears, the imperial family followed their lead. The marriage of geometry and naturalism can be seen in the drawings (below left) of a Buddhist monastery in Hangzhou (below right) and the imperial garden (Jingshan Park) north of the Forbidden City and on its axis. It was through Buddhism that the Chinese love of woods and water came to influence the design of vast landscape parks (eg the West Lake) and the making of 'Chinese gardens' in courtyards within the Forbidden City. 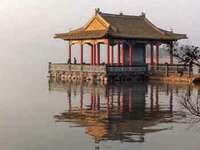 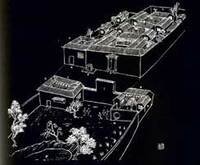 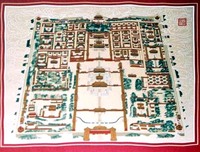 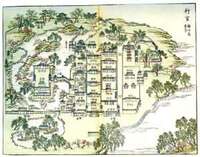