Gardens of the Middle Ages

Alaric, at the head of an army of Visigoths, sacked Rome for the first time on 24th August 410.  After a long further period of decline the last Roman Emperor, Romulus Augustulus was deposed on 23rd August 476. This date is taken to mark the end of the Western Roman Empire. The Eastern Empire survived until the 29th May 1453 and its last emperor, Constantine IX died fighting. The fifth century therefore marks the start of Europe's Middle Ages. Choosing a closing date is less easy. There were rebirths of classical learning in Northern Europe during the ninth and twelfth centuries, but but it was not until the fifteenth century that the trend became irreversible. So let us take 1400 as marking 'the end of the Middle Ages'. H G Koenigsberger opens his book on Medieval Europe 400-1500 (Longman, 1987, p1) with the remark that 'European history began in the fifth century with the collapse of the western half of the Roman Empire under the attacks of the "barbarian' Germanic tribes'. Yet 'Europe' did come into use as a name for this area until the fifteenth century. Before that, it was known as Christendom and throughout the middle ages people looked back to the classical world with a sense that civilisation had declined. They knew that most of their ideas, their books, their technology, and even their bricks, came from a greater age than their own. It was only with the Renaissance of classical standards was only perceived to have taken place after the fifteenth century. This is the Renaissance which began in Italy and spread northwards.

The above introductory considerations can be used to make three points about medieval gardens:

Security was necessary to make gardens during the middle ages. This was available: 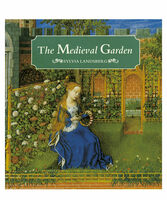 This beautiful image of the Mystical Marriage of St Catherine is on the cover of Dr Sylvia Landsberg's book on Medieval Gardens. St Catherine of Siena (1374-1380) had a mystical wedding ceremony with Christ. The black robe indicates she was a Dominican.