The Landscape Garden in Germany

The development of landscape gardens in Germany can be dated to the end of the Seven Years War. It was a 'natural' development, given the love of nature and forests which had been present in German culture since pre-Christian times.

Frederick II (1712-86), called The Great even in his own lifetime, became the leading figure in Germany, as Prussia became the leading state. He had been harshly treated by his father and this may have contributed to his  becoming the first of Europe's Enlightened Despots. He also had a great desire to prove himself in war. His victories, often against insurmountable odds, have been admired by military historians, including Napoleon, but brought little good to Prussia.  Associating his father's garden at Charlottenburg with brutality, Frederick II decided to make a new house and garden in the relaxed lakeside suburb of Potsdam. The project was influenced by French Rococo ideas. Its name, Sans Souci ('Without Care'), reveals the design intention. Sans Souci was planned as a rural retreat, not the social hub of court life. Frederick commissioned features in classical and romantic styles: Busts of Roman Emperors (1744), an Egyptian Obelisk (1747), a Neptune Grotto (1751), a Chinese Tea-House (1754), and, most appropriately, a Mount of Ruins. During the Seven Years War (1756-63), Prussian estate owners became interested in English gardens, as they were in the English money which helped sustain the war.

The first 'pure'  landscape garden in Germany was made at Wörlitz by Prince Franz von Anhalt-Dessau, between 1765 and 1817. Though surrounded by Prussia, the Prince maintained his independence.  Water dominates the design with visitors having to choose between a long walk and a series of short boat trips. The buildings which populate the garden are in classical and romantic styles, with the choice of classical structures influenced by Winckleman.  The romantic features include a Gothic House, a Swiss Bridge and a symbolic Isle of Poplars to commemorate Rousseau's tomb at Ermenonville. The Georgium, also in Anhalt-Dessau, has artificial ruins and a classical temple.

A Danish Professor of Philosophy and Aesthetics at Kiel University, Christian Hirschfeld, published a Theory of Garden Design in 1779 (see illustrations below). Designers of completely new gardens turned to Hirschfeld for advice. He recommended use of the 'strict English line' of Capability Brown, meaning the serpentine line, hitherto unused in Germany. Although Hirschfeld advised self-restraint with regard to the use of small buildings, they were prominent in his illustrations.  Hirschfeld's Theory of Garden Design and the Wörlitz landscape garden attracted the attention of Germany's leading poet and writer. Johann Wolfgang von Goethe. In 1777, Goethe helped design Weimar's Ilm Park

Prince Puckler (1785-1871) inherited a large estate at Muskau and purchased additional land, in what is now Poland, to create a vast landscape garden (6 sq km and 27 km of paths). Pückler had toured English gardens. Branitz, was Puckler's second project . Because it of the smaller and flatter site, it was easier for Pückler to create the Mixed Style effects associated with Repton's later writings and nineteenth century projects . Branitz has a Pyramid Lake, a Serpentine Lake, a Blue Garden, a Smithy Garden, a Rose Mount, a Moon Mount and Island of Venus, an iron Kiosk and a series of waterways. Puckler was an owner-designer and author. The leading professional designers of German landscape gardens were Peter Josef Lenné (1789-1866), who designed the Potsdam landscape, and Friedrich Ludwig von Sckell (1768-1834) who surrounded Schwetzingen with a landscape garden and designed the famous Englischer Garten in Munich. The nature garden in Germany  top

The development of 'natural' gardens in Germany after the eighteenth century is traced by:  Joachim Wolschke-Bulmahn Nature and Ideology Natural Garden Design in the Twentieth Century Dumbarton Oaks Research Library and Collection 1997 Washington, D.C. Volume 18  (available as a .pdf document from the web in 2003 www.doaks.org/etexts.html). See also: also G. Gröning and J. Wolschke-Bulmahn, “Changes in the Philosophy of Garden Architecture in the 20th Century and Their Impact upon the Social and Spatial Environment,” Journal of Garden History 9, 2 (1989), 54 ff.

Wolschke-Bulmahn emphasises the influence of Jean-Jacques Rousseau, author of the novel Julie ou la Nouvelle Héloise, with over 100 editions and translations published between 1761 and the end of the century, of Goethe and of Alexander von Humbolt. Humbolt  (1769-1859) was the brother of the founder of Berlin University. He spent five years traveling in South America  and wrote a number of books. They were concerned with plants rather than with gardens but supported Rousseau's idea that nature untouched by man was the ideal and Europe, in comparison, was 'barbaric'.

Humbolt championed the idea of protecting indigenous fauna and flora, in which cause Germany subsequently took the lead. The word 'ecology' was first proposed by Haeckel in 1866.

Ernst Rudorff in his 1901 book Heimatschutz, (Homeland protection) as well as a number of essays which preceded it, Rudorff protested at the destruction of nature and called for the creation of nature reserves. Paul Schultze-Naumburg applied this idea to gardens in his books:

Schultze-Naumburg  rejected the 'modern' style of garden and called for a return to eighteenth century ideals. Schultze-Naumburg became chairman of the preservationist Heimatschutz league, founded in 1904, but was not as strong an advocate of the ecological viewpoint as one might have expected. [See Gothein's contemporary comment on Schultze-Naumburg]. Willy Lange, often referring to Rousseau, Goethe, Schiller, and Humboldt, became an advocate of nature gardens in his books:

Lange took up the concept of 'ecology' which Ernst Haeckel had introduced [in his 1866 book General Morphology of Organisms (Generelle Morphologie der Organismen).]

Eugen Gradmann wrote a book on Homeland Protection and Landscape Cultivation (Heimatschutz und Landschaftspf lege) in 1910. The idea of protecting native plants took on a nationalistic theme. Lange and Schultze-Naumburg emphasized the need for a garden to be rooted in a particular place and to demonstrate an understanding of the region in which it was set. Wilhelm Bölsche, also a founder member of Homeland Protect League, wrote a book with a title drawn from Goethe Die and Become! (1913) (“Stirb und Werde!”). He called private gardens to be treated as biospheres dedicated to the preservation of the native fauna and flora, so that they could be saved from extinction.

After the National Socialist (Nazi) Party came to power in the 1930s, the approach to ecology and gardens took on a fascist dimension.

The post-war disgrace of Nazi ideology coloured German attitudes to nature gardens. There was a tendency to think that since Hitler had believed in native plants, local character and vegetarianism, all these things must be bad in themselves. It was only with the growth of the Green Party in the 1970s that a more balanced appreciation of the nature garden tradition became possible.

The historian can see this as a return to the 'natural' roots of German civilisation after the distortions of the Nazi era.

An ecological approach to gardens also developed in Holland under the influence of Jac P Thijsse . The results can be seen at the Amsterdam Bos Park, the Thijsse Park and the Thijsse Hof. 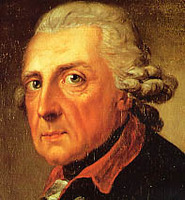 Frederick II 'The Great'. One
would not want to go to war
with such a wily man