The Cistercian order, taking its name from Citeaux, was founded as an austerely reformed departure from the Benedictine order. They withdrew to lonely marshes and valleys, so that they could be separated from towns. But 'They were the best agronomists, the best stockbreeders, and the best foresters of the later Middle Ages. They were experts in fisheries and the use of water, and the valued pioneer of mining and smelting' [p73]. See Meer F Van Der Atlas de l'Order Cistercien (Harlem 1965) for details of where they built. p.74 Every Cistercian monastery was placed beside a stream in a valley (never on a mountain, by the sea, on an island, or beside a lake). Best of all, like Clairvaux itself, was a vale opening towards the west and closed by hills or mountains to the north south and east. Their great skill with water is described in the extract below and shown on the plans.  Clairvaux was 'to a large extent destroyed by the fanatical devotees of Reason in the French Revolution' [p.81]. It was St Bernard's own abbey. He wrote that 'A monk's duty is to mourn, not to teach'.

Gothein uses the quotation from Migne, below, and comments that: 'This picture of a French monastery garden at the beginning of the twelfth century, with canals round it, is an early indication of the effect that the Renaissance will have on the gardens of France.' The illustrations date from 1708

If you want to become familiar with the site of Clairvaux, let these words be as a mirror for you. Two mountains begin to rise not far from the abbey and are at first separated by the incision of a narrow valley, through the widening aperture of which they are cloven into a gorge as they get nearer the abbey. One of them occupies half of one side which the abbey is on, the other occupies the whole (of the other side).
Further on, the rear of the abbey protrudes into a broad plain, no small part of which is enclosed by the wall that surrounds the abbey with its extensive circuit. Inside the confines of this, many and varied trees pro fuse in divers fruits make an orchard like a grove. Being contiguous to the infirmary, it affords no slight consolation to the sick brethren, since it offers a spacious walk to the up and about, and a pleasant resting - place for those who are hot.
Where the orchard ends, a garden divided up into small patches by streams flowing between them begins. . . . This water serves a dual function, in nurturing fish and irrigating vegetables. It is fed from the inexhaustible flow of the renowned Aube. Making its way through the many offices of the abbey, it everywhere leaves a blessing behind it by virtue of its faithful service. . . . It cuts through the middle of the valley, winding through a channel made not by nature, but by the labour of the monks, and dispatches half its volume into the abbey.
And if on occasion its swollen current impetuously overflows it is driven back by the wall of the sluice under which it has to flow and flows back into itself, and the downward flow once more embraces what has flooded back. But insofar as the sluice, acting as a porter, lets it in, it makes a first assault upon the mill, where it is greatly churned up and thrown in several directions, now pulverizing the grain in the mill - stones, and now separating the flour from the bran with a fine sieve.
Now it fills the cauldron in the building nearby. . . . But it has not yet finished, for the fullers invite it to them. Just as it is busy (for those) who are in the mill by which the brethren are fed, it now appears at the place by which they are clothed. It does not say nay . . . but instead, alternately raising and lowering the heavy pestles, or as you might prefer to say, hammers  -  though wooden feet might seem a more appropriate name for this leaping work of the fullers  -  it relieves the fullers of heavy labour.
As it turns so many chattering wheels round in swift rotation, it makes a foamy exit, and seems as if it was itself ground and made softer.
It is then intercepted by the building of the tanners, where it shows industrious application in making the things necessary for the brethren's shoes. Thereupon, apportioning itself piecemeal among a number of arms, it seeks out individual buildings in its obliging rounds, diligently enquiring everywhere what work has (need) of it and for what task  -  whether for cooking, sieving, turning, grinding, watering, washing, milling or softening, lending its compliance without gainsaying. Finally bearing away the refuse, it leaves everything spick and span behind it. Having vigorously carried out everything for which it came, it hurries back to the river with great speed. . . . Here let us return to the streams we left behind us and which, diverted from the river, wandered through the meadows in idle loops . . . these streams, or rather ditches, once their task is done, are absorbed by the river which spewed them forth; now the Aube, all together once more, rushes down the slope in headlong des cent. . .

St Bernard loved the rose and fostered the cult of the Virgin Mary. Alan of Lille wrote 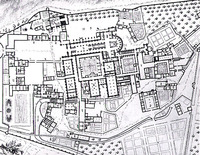