[Many thanks to JH for the following comments and photographs, Editor] See note on visiting Westergasfabriek Park and link to website.

Westergasfabriek Park is a wonderful achievement. Still under construction when visited in November 2004, one cannot but be impressed with the physical scale and civic ambition with which an old gas works has been converted into Westergasfabriek Park. In design terms, however, it suffers from what could be construed as typical flaws of late and early 20th century park design: lack of definition of spaces and places to provide a sequence of human experiences which play on the emotions and cater imaginatively for human use. A two dimensional design which looks great on plan can become pattern-making at eye level. And there is not a bench with a backrest in sight. This marks it out as a relative of the Modernist tradition, albeit updated.

The failings of the park may not be Gustafson's fault - she's more an artist than a landscape architect - but one is left gagging for places that enrich the human spirit and are a joy to walk through, sit in and contemplate. The lessons of history seem to have been ignored: where's the equivalent of the Queen Mary Rose Garden, Regent's Park (horticulture to gorge on); the diversity of Central Park, New York (to play, relax, learn, eat, greet, watch or be watched? - it's here somewhere); the idiosyncracy of Great Dixter (enclosed garden spaces dressed with seredipitous plantings); the triumph of Oak Alley, Lousiana (a grand avenue of Live Oaks dressed with Spanish moss); the drama Parc Sceaux (a canal enclosed by cathedral-like poplars); the subtlety of Castle Drogo (space, time and yews cascading down the valley side)? Look to the north of the wonderfully long footpath/cyclepath running the length of the northern boundary and beyond, and you want to experience the disorganised richness allotment gardens just the other side of the water filled ditch.

Having said that, the trademark Gustafson granite detailing, landform and use of water form two organising principles for Westergasfabriek Park - the water axis and the cultural axis which parallel each other, one flowing to the north of the site, the other to the south and touching at the cultural nexus. But another Gustaffson trademark is the lack of a wide enough path to the edge of the water body as at the Princess Diana Memorial Fountain - fortunately this can be easily fixed. 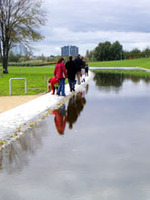 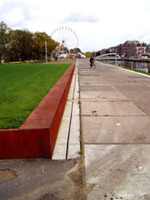