[Many thanks to Madis Pihlak of Pennsylvania State University for the following comments and photographs, Editor]

What do seven thousand five hundred sixteen feet high (4.8768 meters) saffron orange gates snaking through 23 miles (37 km) have to do with perhaps the iconic work of landscape architecture? Central Park in New York City is a monumental achievement of landscape architecture. This is why it has taken Christo and Jean Claude since 1979 to achieve their public art vision. Yet, Frederick Law Olmsted and Calvert Vaux designed the park for the public to stroll the tree lined alles and to recreate in the meadows. Christo and Jean Claude have been able to create an extensive public art work which engages the jaded New York City public and that is very accessible to the informed public. Even the staid New York Times Art Critic has given his approval. New York City has changed for the better since the terrible events of 9/11. Yet visitors to the Gates project in Central Park smile even more and appear to be in a festive mood. Grown men jump and touch the top of the saffron nylon curtain which appears to be about eight feet (2.4384 meters) tall. Children are carried aloft to bump their heads gently against the billowing saffron curtain. Even pets are included, with many visitors bringing their dogs.

Christo and Jean Claude chose the Gates title as they were immigrants from Hungary and felt that the title symbolized their new country. The fact that it took the current mayor of New York , Michael Bloomberg to make the project happen speaks to the hostility that the horticulture and landscape architecture world has to real artistic expression. On the LALIstserv hosted at the University of New York at Syracuse there was substantial negative discussion of how the Gates art would impact the park and vegetation. Certainly the ecological foundation of horticulture and landscape architecture is indisputable. However the Gates project are a perfect example how a 21 st century public art project can interact with a 19 th century work of landscape architecture . The Gates march over beautiful stone bridges, along utilitarian asphalt pathways and wind their way through out the park. Each individual gate rests relatively lightly on the park on heavy stone like bases which anchor the gates and prohibit anyone from moving the gates. This is New York City after all.

The main reason any designer should see the Gates is that the art so seamlessly engages the landscape architecture that the Gates seem like they have always been in the park. Of course this is ridiculous and this may be where the cheerful mood of the viewers comes from. There is an immediate accessibility to the art. There is no reason to ponder what the artists intended. The works are incredibly photogenic. It is very easy to take could photographs of the Gates. It is as if the park got a Hollywood style makeover for the Academy Awards.( The Academy Awards are Feb 27, 2005) 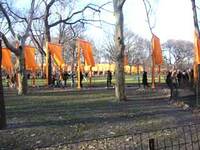 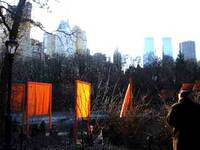 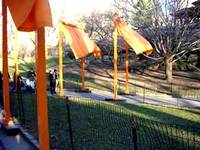 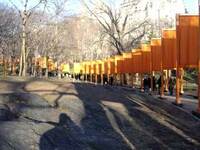 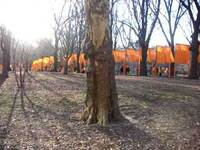 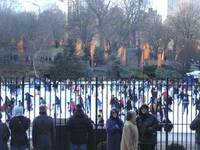