The classical twentieth century approach to landscape design has been Survey-Analysis- Design (SAD). It has been elevated to the status of a design methodology and cruelly overworked. The resultant places lacked clarity of intention. Too often, they were a muddy compromise between innovation and conservation. The SAD method produced sad results. It should be put out to grass like a pool old tired horse.

In the late unlamented days of the Landscape Institute Part 3 Design Set Piece Examination, it was scarcely possible to succeed without adopting a SAD approach.

Examiners were issued with pre-printed mark sheets. Boxes assigned percentages to ‘Survey’, ‘Analysis’ and ‘Design’. Students felt compelled to use what became known as the ‘Three Sheet Method’, or the supercharged ‘Five Sheet Variant’ (with two additional sheets, named ‘Appraisal’ and ‘Concept’).

This article, which arises from work at University of Greenwich (then Thames Polytechnic), puts forward one ofthe alternatives to the SAD method. Since the Diploma with Honours Course was re-planned in 1990, half of the time has been given to landscape planning, in the belief that a lack of good landscape planning in the UK is the crucial obstacle to better landscape design. Work with the European Education Exchange (ELEE) programme indicates that the dominance of the SAD method is primarily in the Anglo- Saxon countries.

I spoke to an artist last year who had employed a landscape architect to design a garden. The client felt alarmed and threatened by an ‘analysis drawing’ which, he said, had arrows stabbing into the garden from different directions, ‘like a co-ordinated panzer attack’. The conversation reminded me of some diagrams which I once prepared (c 1980) to illustrate the SAD method (Fig 1). I guess that:

The chief flaw in the SAD method is the endeavour to derive values from facts. This is scientific determinism with totalitarian implications. Any person or machine using deterministic methods ‘should’ reach the same conclusion. Ian McHarg, the leading landscape planner of the l970s, specifically stated that when using his Ecological Method: ‘any man, assembling the same evidence, would come to the same conclusion”. To escape the inherent determinism of the method, some proponents allowed a ‘creative leap’ between Analysis and Design, but the circumstances were not propitious. As Peter Youngman often noted at Thames, ‘a great lion of a survey leads to a little mouse of a design’. This is not to criticise the single agreen law of landscape design: ‘consult the genius of the place’; surveys must be done.

The leading planning theorist of the 1970s (J Brian McLouglin) summarised the SAD method as follows, with regard to planning and to Patrick Geddes: ‘His message was very clearly stated in the now-famous cycle of ‘survey, analysis and plan’. The approach revolved around simultaneous awareness, or ‘synoptic vision’ of ‘Place, Work and Folk’. His influence has been extremely powerful both for good and ill. The great benefit of the Geddesian heritage is a very healthy concern for his principle of diagnosis before treatment, understanding before action. But on the debit side, misunderstanding and unimaginative interpretation of his message has led to a tendency towards collecting information for its own sake... Worst of all, many plans seem to bear little if any relationship to these great catalogues of information; it is almost as if survey or information-collecting was a kind of ritual behaviour, an appeasement of some planning god to ensure his blessing on the plan itself.’ Geddes, it should be remembered, was the first British citizen to describe himself as a ‘landscape architect’, in 1904.

One alternative to the SAD method, with which the Diploma students experimented in the 1990-91 session, is inspired by the work of Christopher Alexander. The Timeless Way of Building and A Pattern Language arrived in the library some 12 years ago. I re-read them in 1986, when writing a book on Landscape Planning, and noticed that they had hardly been borrowed. But in the last two years the Pattern Language has become the most sought after book in the library, by architects, landscape architects and surveyors alike. I do not think the recommendation has come from staff.

When a child opens its eyes for the first time, a bewildering array of sensory data comes to view. Pattern recognition was vital to man’s success as a hunter. As the child grows, it learns to recognise different kinds of pattern: food, mother, house, friend, heat, fear, work, play, speed, and so forth. The child then learns a language to describe the patterns. Some pans of the language depend on words, others on gestures and actions —a raised hand, a kiss, or a certain sitting position. ‘Leaving home’ implies entering into a new web of physical and social patterns.

If that child becomes a landscape designer, he or she must learn how places are made, what makes them ‘good’ or ‘bad’, from various standpoints, and how they may be changed. All this requires knowledge of new patterns and of a new language with which to handle them. The language is more than words. It embraces actions, habits, models, numbers, diagrams and drawings. They are used to describe complex processes: erosion, growth, transport, energy, diversity, security, enclosure, circulation, proportion, texture and grain. Some parts of the language will be shared with the general population. Others will be unique to planners and landscape designers; others to the individual. In talking of landscape design, many general ideas can be described as patterns. The word provides a common currency to exchange the different ways of analysing places.We can speak of Crowe Patterns, Alexander Patterns, Day Patterns and others too (Fig 2).

The approach to landscape planning which derives from the Alexander and Crowe uses of ‘pattern’ proceeds as follows:

When extending the method into design, ‘pattern’ can also be used, as in Day’s book, to provide a third category of input: geometrical patterns from nature, the fine arts, decoration, or visual design. ‘Patterns’ can also come from history, theatre, poetry, philosophy and elsewhere. Bernard Tschumi used overlain geometrical patterns to generate the most innovatory park design of the 1980s: Parc de la Villette. His plan is visually and philosophically dynamic. But it is shallow: function is made to follow form; the urban ecosystem is disregarded. Architectural theory is deconstructed. Verily, this is architecture against itself. La Villette is a folly et une folie. Geometrical patterns are an insufficient basis for design. 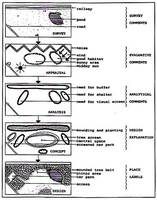 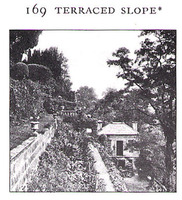 An Alexander Pattern (above)

A Crowe Pattern (above)

A Day Pattern (above)