Technical considerations are important when choosing garden materials, but so are ideas and associations. Consider the concrete slab. It has wreaked havoc in modern gardens, because concrete is such a faithless material: it has the crispness of fresh snow when first laid, but deteriorates thereafter. Snow symbolizes virginal purity. Stained concrete symbolizes the ersatz horror of the "concrete jungle'. Out of sight is the only proper place for concrete in gardens. Stone, by contrast, symbolizes strength, unity and eternity. During the animistic era, stones were worshipped, with meteorites held in the highest regard. The Black Stone of Kaaba, kissed by pilgrims who visit the Great Mosque in Mecca, is believed to have fallen from heaven as a white stone and turned black on encountering the sins of man.

Old garden walls were built with lime mortar, which is softer and kinder to plants than cold grey Portland cement. Hydraulic lime is made by heating chalk or limestone to drive off the carbon dioxide. When it is re-mixed with water and exposed to the air, it recombines with carbon dioxide and reverts to its original chemical state. Carbon dioxide reaches the outside of the mortar first, and it may be a century before full bond strength is achieved. This has made lime mortar unpopular with builders, but it can still be used by gardeners. Twenty years after completing a wall, one can be thinking that "it's gaining strength now', as one does with a tree of the same age.
"

You are a perfect brick' is now an old fashioned compliment. It told of a personality that was strong, warm and kind. These remain the qualities of good bricks. Mud bricks, of the type used for the walls of Babylon, were made by shaping wet mud into blocks. They were dried in the sun and placed in position, sometimes with pitch in the joints. About 3000 BC it was discovered that when mud bricks are fired they become hard, as when clay is made into pots. The Romans became expert at brick making and brought the skill to Northern Europe. When they left, brick manufacture virtually ceased. Hard Roman bricks were salvaged throughout the Middle Ages to build chimney stacks and church spires. It is not easy to achieve high temperatures in a primitive kiln. Brick manufacture recommenced in England after AD 1200, but good-quality bricks were imported from the Low Countries for many centuries. Small hard Dutch bricks can still be found in the south of England (Figure 4). It is only in recent times that brick sizes have been standardized, and it has not been a benefit for garden construction.

Hand made bricks have a varied surface texture, which cannot be reproduced by machines. They can also be made in any size. Lutyens liked 50mm (2in) thick bricks, instead of the standard 75mm (3in). Hand made bricks may seem a luxury, but few gardens require a large quantity, and the cost of the raw materials is not a large proportion of the brickwork cost. One soon forgets the cost, and the pleasure endures. If one is doing the work oneself, the cost of first rate materials is easily justified. And it is very therapeutic to do one's own brickwork, as Winston Churchill found in the 1930s.
Terracotta is an ancient material, which remains of great value in gardens. It is just clay that has been shaped and fired, usually to a lower temperature than bricks, to achieve that gorgeous red colour. It is used to make tiles and pots. The word "terracotta' means "fired earth'. Given its high quality, it is astonishing that some manufacturers offer terracotta substitutes in concrete and plastic. In the Mediterranean countries, the manufacture of terracotta pots has continued since ancient times. They are illustrated on wall paintings of Egyptian and Roman gardens, and some of the shapes are still available. These pots are a link with the classical gardens of antiquity, with Plato and Aristotle, Bacchus and the Maenads, Pliny, Virgil and the Medici gardens of Tuscany. The festoon and swag patterns on classical pots derive from the garlands of vine leaves that were used to decorate gardens at festival times. Tuscany remains a great centre of terracotta manufacture. Spanish, Greek and Portuguese pots are also beautiful. The pots of Northern Europe have a different kind of refinement. 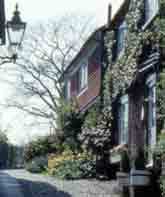