Ideas lie at the heart of garden design. Designing without ideas is almost a logical impossibility. Garden design ideas can come from many sources:

Geometry is not at all the same as Art. But geometry has always been a source of fascination to designers. And certain shapes have been treated as symbols, most notably the circle and the square. In Hindu and Buddhist religious thinking a square symbolizes the earth and a circle symbolizes heaven. In western aesthetics, deriving from Plato, the circle and square have had a cosmic significance as the primary geometrical forms and therefore the 'building blocks' of the universe. Christianity adopted this design idea from the Neoplatonists, and also used the geometry of the cross in religious architecture. The belief in sacred geometry also appears in Islam, along with a belief in geometrical patterns derived from numbers.

Geometry is intrinsic to the structure of the universe and now has the 'foundation' in mathematics and science which it once had in religion. Modernist designers, generally secular in their approach, have been fascinated by the contrast between the contrasting geometries of the human and natural worlds, illustrated by the contrasting forms of architecture and landscape. 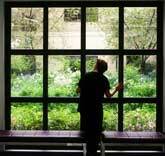