Canada was originally populated by Inuit tribes. They came via the land bridge between Siberia and Alaska and there are no records of their having made gardens.

Canadian gardens in the seventeenth and eighteenth centuries

European explorers (Vikings) first reached Canada in the tenth century and from 1496 onwards English and French explorers began to reach Canada. In 1608. The Historic Gardens at Annapolis Royal aim to represent the periods of European influence on Canadian gardens. The garden of the seminary at Domaine Maizerets was primarily functional c1705. The Bois de Coulonge dates back to 1653.

French settlers established a colony in Quebec, which was known as New France. The best representation of gardens made during this period is at the Fortress of Louisbourg. Canada was not sufficiently wealthy during this period for full-scale high baroque style gardens to have been made but renaissance style patterns were used for flower and vegetable parterre gardens.

English settlers began to establish colonies after 1670. The French settled along the St. Lawrence River and the Great Lakes. The British settled around Hudson Bay and along the Atlantic coast but the settlers were fishermen and huntsmen without the landed gentry class which was making Augustan and Serpentine style gardens in Britain. When France lost the Seven Years War with England (in 1763) the whole of Canada came under British control. The French-speaking inhabitants of Canada were keen to retain their traditions and language and the Quebec Act (1774) granted these rights. English-speaking colonists, called Loyalists because they wished to remain faithful to the British Empire, moved to Canada when America won its independence in 1776. In 1791 there was a split between Upper Canada (English speaking) and Lower Canada (French speaking – Quebec). In 1841, after an armed conflict, Upper and Lower Canada were united the (British) Province of Canada.

Canadian gardens in the nineteenth century

Canada's English and French language groups retained close ties with their mother countries during the nineteenth century. Domaine Joly de Lotbiniere was made by a family of French origin.

Canada's government was based on the British parliamentary system, with a Governor General (the Crown's representative) and a Parliament comprisings a House of Commons and a Senate. The Victorian styles of making public parks and private gardens were established and in some respects survive better in Canada than in Britain. Canada has many fine public parks and private estates in the High Victorian Mixed Style. Its wealth of forests was favourable to the Gardenesque style of planting design and it was well suited to botanical gardens.

Canadian gardens in the twentieth century

Canada played an important role in the First World War and was represented separately from Britain in the League of Nations after the war. In 1931 Canada's constitutional autonomy from Britain was established by Statute of Westminster. With the relative political and economic decline of the British Empire, Canada came increasingly under the influence of America. But the Mixed Style retained its popularity and neither the Arts and Crafts style or the Abstract Style of garden design was as influential in Canada as in America. The environmental movement became strong in Canada and new botanic gardens were founded with the prime aim of conserving the native fauna and flora. Canada opened its doors to non-European imigrants and has reason to be proud of its Chinese (eg Sun Yat-Sen Classical Chinese Garden) and Japanese Gardens (eg

Looking to the future, Canada has organised garden design festivals and attracted garden designers and landscape architects from outside Canada to show examples of their work. 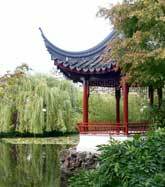