The aim  of the Tiananmen Square Landscape Compeition is to generate debate and ideas for re-designing part of the most important urban space in the history of Chinese Civilization. We hope this will also set a new course for Eastern Landscape Architecture, helping in the development of an ecologically and culturally distinctive design tradition. This is a Web 2.0 landscape design competition running from March 2009 to June 2010. Free download of eBook report on Tiananmen Landscape Architecture Competition.

Dates for the Tiananmen Square competition

The brief is to put forward an idea for the re-design of Tiananmen Square in Beijing, China.

Submissions should be illustrated with 1-5 images. They can be montages, models or plans, 2d or 3d, hand-drawn or computer-drawn or photographs of physical models. When uploading an image to Flickr please use the description field to outline the design idea.

The competition is open to everyone: amateurs, students, professionals, anyone. It is a 'wide open' ideas competition.

How to enter for the Tiananmen Square landscape competition

Tiananmen means 'Gate of Heavenly Peace'. The Gate was first built during the Ming Dynasty (1420) and the historic space was designed in 1651. Beijing, once known in Europe as Peking, is the best example of one of the world's foremost urban design traditions. Its dedication to Peace makes a wonderful contrast with the Triumphal Arches and Victory Avenues which litter Europe. China has a tradition of landscape and urban design which extends over 5,000 years - it began as cultivation was reaching the shores of  North Europe.
In 1958 the world's largest and bleakest 'urban square' was laid out on what was once an Altar of Agriculture. Tiananman Square now contains a Monument to the People's Heroes (1958) and the Mausoleum of Chairman Mao Zedong (1977). It is a vacant expanse of slabs with nowhere to sit and nothing to do. The landscape architecture profession in China has grown rapidly but now faces a supreme challenge: how to re-design  Tiananmen Square.  Though understandable, Tiananmen Square was a terrible blunder and this should be recognized. Only then can it become the brilliant centre of world peace and civilization which Beijing deserves. The current  lack of design is understandable for three reasons:

Tiananmen Square was an unsuccessful design for three reasons:

So what should be done? This Ideas Competition is an attempt to help answer the question. Finding an answer is a great challenge for the landscape architecture profession. Please help!

People of the Chinese Republic - with nowhere to sit (image Gardenvisit.com) 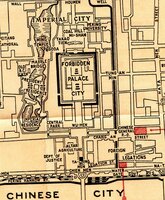 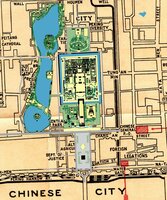 The 1958 landscape design for Tiananmen Square, shown with the Forbidden City and the Three Seas, with Cook's 1920 Skeleton Map of Beijing as a background (image Gardenvisit.com)