The first circular construction at Stonehenge was  made some c5,000 years ago. Horticulture began in the Levant c10,000 years ago and reached the British Isles c4,000 BCE, probably by cultural diffusion. The design of gardens for temples and palaces probably began in Mesopotamia 5,500 years ago and the Romans made palace gardens in the British Isles after 43 CE. Yet these islands became home to the most enthusiastic gardeners and London became the capital city of garden design. Why?

The earliest information about designed open space in the British Isles dates from the arrival of the 'Neolithic package' of farming techniques. This led to the making of sacred outdoor space, like Stonehenge, to enclosed settlements, known as hillforts, and to small enclosures in which plants were cultivated on a domestic scale, known as 'Celtic fields'.

The earliest British examples of the type of space we now call 'gardens', and therefore the first 'British Gardens' were made by the Romans after the Claudian invasion of 43 CE.  They built luxurious residential palaces with palace gardens of a type which had originated in the East Mediterranean and West Asia. The influence of this garden type extended into the period of Anglo, Saxon and Scandinavian invasions when 'English' culture became established, but few details survive from this period.

Few details and few places survive, but there is good evidence that gardens were made in Britain during the Middle Ages. The main British medieval garden types were: castle gardens (herbers), palace gardens, manor gardens, peasant gardens and monastery gardens.

British gardens came under the influence of renaissance design ideas, from Italy, France and Holland, towards the end of the fifteenth century. The gardens of the sixteenth century, often described as Tudor, were part-medieval and part-renaissance in character.

The advent of Baroque influence on British gardens is associated with Charles I, Charles II and William of Orange. Parterres replaced knot gardens and avenues were projected from compartment gardens into the wider landscape, but there was usually something half-hearted about the British approach to Baroque culture - probably because England had become a protestant country with an emerging democracy.

The famous 'landscape gardens' of eighteenth century England began as neoclassical re-creations of the imagined landscapes of the classical world.

Towards the end of the nineteenth century, British garden designers were influenced by the Arts and Crafts movement. They aimed to rescue garden design from eclecticism by learning from nature, craftsmanship and the fine arts.

Some British garden designers were attracted t the International Modern style but their clients, in the main, retained a loyalty to Arts and Crafts ideas. Landscape architects and their clients were much more attracted to abstract design principles.

Note: the gardens listed above are in the same sequence as they are illustrated in British garden history, which is why some garden links are duplicated 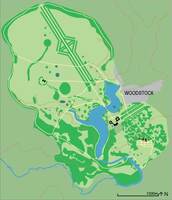 Waddesdon Manor has a great Victorian garden in the Gardenesque Style

Sissinghurst has one of the best-loved Arts and Crafts gardens