Walking the Main Avenue at the Chelsea Flower Show, one sees gardens of great style and luxury. Do real people have real gardens like this?  A show gardens costs between £0.25m and £1m but is small and exists only for a week. Are they akin to unreal TV adverts with beautiful people enduring beautiful lives? Or are they glimpses of how the other 1% lives? Yes, on the evidence of this. But the book does not resolve another puzzle. The Chelsea Show retail displays, on Western Avenue and Southern Road, have many amazing examples of grotesque bad taste: concrete gorillas, kitchy fountains, naff statues and back-breaking lumpen furniture. Such atrocities do not appear in Tim’s book. So who buys them and how are they used in ‘garden design’?

Andrew Lawson’s superb garden photography gives New English gardens a hyper-real quality and set my thoughts in another direction. Can Andrew orchestrate the weather gods? Does he bring flowers to perfection, arrange the clouds as reflectors and ask gentle breezes to caress stypa?  The first garden photograph I remember taking, aged about 10, was of daffodils in an orchard at Easter time. Since then I have taken a lot of photographs - occasionally in gardens when Andrew was present. He is a year older than me and will have taken more photographs. But I think I should have been able to take at least one garden photograph which is as good as his minimum standard for a publication - and I haven’t. His advantages, I suppose, are more talent, better equipment and more time for each photograph.  As a fellow-photographer I appreciate his work - and would like to know how many publishable photographs he takes in a day. Not too many, I guess.

Tim Richardson brings knowledge, judgement, style and wit to his task. For this book, they were necessary. Every historian will tell you that writing the history of one’s own time is impossible. You need the perspective of half a century or more. The New English garden is more reportage than history. But Tim is a historian and therefore gives facts and pointers which may guide future historians. The first two sentences of the Introduction are:

Tim proceeds to explain what makes his selected gardens new: ‘flicking through the pages it becomes apparent that the trend over the past few decades has been towards a more naturalistic approach to garden making’. This has more to do with planting design than with the geometry or functionality of gardens:

A new palette of repeated grasses and large drifts of perennials (frequently tall or daisy-flowered) began to have an influence, in a movement initially known as the ‘Dutch Wave’, occasionally as ‘matrix planting’ but later more commonly as ‘New Perennials’.

As with Roman, Norman, Renaissance and Baroque design ideas, the new perennials trend started in continental Europe. It began with the work of Karl Foerster in Germany and Piet Oudolf in Holland. For Tim ‘The high watermark of the New Perennials-inspired naturalist planting movement in Britain might be considered Trentham, which includes the work of both Oudolf and Tom Stuart-Smith)’.

Tim has written a big book and it is printed on very good paper. So he could hardly have included more content and he does have to sleep, eat and care for his family. But if he had done two books then one of them could have been New English planting design, and the other New English garden design. The later would have more to say about what Tim has often called Conceptual Gardens. He remarks that:

Nowadays, when people ask whether gardens can legitimately be considered as an art form, my riposte is that art should surely aspire to the condition of gardens.

Well said. There always has been an overlap between the fine arts and garden design. The two big problems are that gardeners care too little about art and artists don’t care enough about gardens. Like Giant Pandas, both parties need sex therapy or artificial insemination.

Many dramatic new garden designs are illustrated and described in The New English Garden. I strongly recommend it to clients who are thinking about a new garden and to designers who sit down with them for tea and talk about garden design ideas. Most are additions to old gardens. This is inevitable, in an overcrowded country, but it is also desirable. Gardens need one-off ‘master plans’ but must also, to greater and lesser extents, keep on changing. As Karl Popper so-convincingly argued, Blueprint Planning is a dangerous activity. Piecemeal Planning is the alternative which gardeners practice. We do it whenever we cut grass, re-align a path or re-plant a border. Tim has a keen interest in garden design philosophy and particularly interesting accounts of Dan Pearson, Tom Stuart-Smith, Henk Gerritsen and the Prince of Wales.

My only criticism of this excellent book is its size. Coffee table dimensions are too much for bedtime reading and heavy-ish for armchair reading and bulky thereafter on a bookshelf. It is great value on Amazon (£19.45 in 2013). No Kindle edition is offered. I agree that much would be lost if the ‘book’ were on a tablet. But I think it would be fine on my 16” laptop if it had a touch screen and if I felt I was getting it for an appropriate discount on the dead tree price. 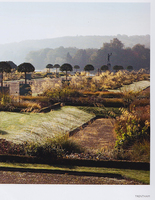