Around The World In 80 Gardens by Monty Don (Weidenfeld & Nicholson, 2008) - review by Tom Turner

The BBC2 series Around The World In 80 Gardens, began broadcasting in the UK on BBC2 in February 2008. It is introduced by Monty Don and he has also written a book with the same title. According to Wikipedia (2008) 'Montagu 'Monty' Denis Wyatt Don (born 1955) is a BBC television presenter, writer and speaker on horticulture. Monty Don received no formal training as a gardener. In his own words "I was – am – an amateur gardener and a professional writer. My only authority came from a lifetime of gardening and a passion amounting to an obsession for my own garden." He is a keen proponent of organic gardening and the practice of organic techniques, to some extent, features in all of his published work. The organic approach is most prominent in his 2003 book The Complete Gardener. Monty and wife Sarah's previous career in the 1980s involved making and selling costume jewellery under the company name 'Monty Don Jewellery'. The collapse of the company in the early 1990s prompted him to embark on a career in writing and broadcasting. He has written about the rise and collapse of their business in The Jewel Garden, an autobiographical book written with his wife, Sarah.'

Monty Don's career shines through the book. He has the easy confidence of a late-born hippy, some knowledge of horticulture and a slight knowledge of garden history - which scarcely matters. Monty walks into gardens with the wide-eyed enthusiasm of a package tourist. Most places are 'extraordinary', 'wonderful' or 'amazing'. Fortunately for the viewer and reader, the series has the rocket-fuel backing of a BBC film crew. No other broadcasting organization has such lavish taxpayer funding and we must be grateful that some of the billions are flowing into garden photography. The book is similar - very much in the Michael Palin school of travel writing. Regrettably, those excellent BBC cameramen did not do the still photographs for the book - and their quality is poor.

Monty Don once did a 'Down your way' type TV series in which he travelled to English towns and talked to all sorts of people. It was very well done and the ability to 'speak for everyman' enlivens the TV series, though I have heard some viewers say they would have liked to see even more of the gardens - and a little less of the 'Full Monty' (despite having lost his clothes in South America he is always, and thankfully, clad.. Every third photograph seems to include Monty, either to give scale to the gardens or because the publishers think he is dishy - he certainly has a 'Hugh Grant' talent for blunders and readers can hope to find one on every page.

The 80 gardens Monty Don visited by are as follows:

The Floating Gardens of the Amazon, The Amazon Rainforest

The Black Earth, The Amazon Rainforest

The Patios of Cordoba,

AA Gill wrote of the TV series that " It was an inspiring, if chaotic, start, not least because none of this is what most of Monty’s fans would consider a garden at all. So we waited, bated, for Monty to explain it all, to make its wonder live, to drench our parched cerebellums with insight and knowledge. He smiled his crooked smile, shrugged his pergola shoulders and opened his mouth – and what came out was the sound of the wind in the trees, a scarecrow creaking in a field of sunflowers. He made the cardinal mistake of presenting and told us what we could already see. He then made the second mistake of presenting by paraphrasing what we would be thinking if we were standing where he was. Extraordinary, he said. He said it many times. Many things were extraordinary. Extraordinary things, in particular, were extraordinarily extraordinary. Having gone to all the trouble of getting to frankly extraordinary places, Monty had forgotten to pack a script or even a few jotted notes, trusting instead to his enthusiasm, alfresco impressions and faded cotton. It was left to an editor to try to topiary some rough logic from his rambling. It was a terrible, terminal mistake. There was so much we yearned to know – so many questions hung in the air – but what we got instead of intellect was “amazing”, “astonishing” and “extraordinary”. 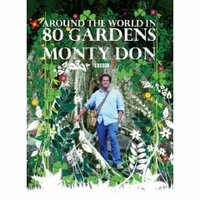 Around The World In 80 Gardens