History and theory of garden design and landscape architecture > Reviews of books on garden and landscape design > Landscape London: a guide to recent gardens parks and urban spaces

Like most Ellipsis publications, this is a true handbook which will sit happily in the palm of your hand. The author is a landscape architect with a leading London practice. The selection of projects is interesting and varied. Notwithstanding the author's profession and the book's title, it properly avoids confining itself to the work of landscape architects.

The introduction to the book is historically shaky without being incorrect. Finsbury Circus, for example, is cited as first 'public park' in London. It is in fact on the site of the old Moore Fields, which was indeed laid out for recreational use. To count as a 'public park' in the nineteenth century sense, it would also have to have been in public ownership.

The 70 project descriptions are sharply observed and well-written, often with a welcome touch of humour but not often enough with that dash of acid which so many projects deserve. One can see work of a far higher standard in Paris, Amsterdam and Berlin. The author's criticism of the work on the Greenwich Peninsula is well-made and could have been far stronger. She writes 'The masterplan has been strongly criticised for not going far enough in terms of sustainability, especially where car transport is concerned. It's a shame that opportunities for sustainable urban drainage were missed. Everything looks as though it were thrown together at breakneck speed - it was, in time for the eve of a new Millennium'. In fact, the job was totally botched. They had known the Millennium was coming for 2,000 years; Michael Hesseltine had already botched 5 Garden Festivals; the park is appallingly located; the riverside walk is far too wide; the ecological river terraces were too cautious and too expensive; the landform design was ignored; the 'sustainable housing' is not sustainable; the cycle planning is murderous; the vegetation strategy was minimal. A guidebook of this type has just as reason to say what is bad as  what is good. 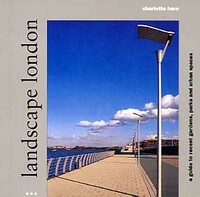