The house, dating from 1778, has shady gardens with exotic planting. It is set in a karst landscape of deep valleys, woodlands, olive trees and small fields protected by dry stone walls. The Hyblaean Mountains have white (limestone) rock and black soils. They are rich in wildflowers, including orchids, wallflower, daffodils, iris, lavender, mint, origanum, rosemary and thyme. At least since the time of Virgil, the region has been famous for its honey.

Sweet honey, nor yet so sweet as passing clear,

And mellowing on the tongue the wine-god's fire.

Tenuta Cammerana is 360m above sea level, 14 km from the picturesque hilltown of Ragusa and 17km from the Mediterranean.

The surrounding wall conceals a fragrant garden containing many varieties of jasmine, bearded iris and peonies, antique roses and Pelargonium, lotus flower and bougainvillea.
Indian barrels brighten the evenings at the end of summer with their bows, while the scent of Cistus leaves inebriates the air.
One of our valued projects has been the preservation of the stable meadows, grassy formations that have never been tilled (ploughing and harrowing).
These form the habitat of species of interest, for example, Hermodactylus tuberosus, Erysimum bonannianum, Neotti nidus-avis, Oprhys fusca....etc.
During recent years we have made an inventory and catalogue of the species found in the stable meadows of the Ibleo Plateau: we have contributed a new tool for the conservation of biodiversity in this part of Sicily.
The landscape is pervaded by the black earth typical of this area of Sicily, interspersed by large sheets of white rock creating a picturesque duotone.
A wide variety of wild plants, such as thyme, sea squills, asphodels, thistles and irises adorn the lawns behind the rocks in the wild garden..
The careful preservation of natural heritage, carob forests, wild fruit trees, native palms, the many varieties of herbs and some rare species makes this place a natural paradise. Wildlife finds an ideal habitat in the Plateau: wild rabbits, porcupines, buzzards, hoopoes, owls and foxes are the creatures that live harmoniously in our acres.
Our House is open from April to November. With its authentic interiors and old-style hospitality, Tenuta Cammarana, offers complete respite from the world. A truly private retreat free from distractions and intrusions of the outside world. Tenuta Cammarana B&B has five original and uniquely decorated bedrooms. 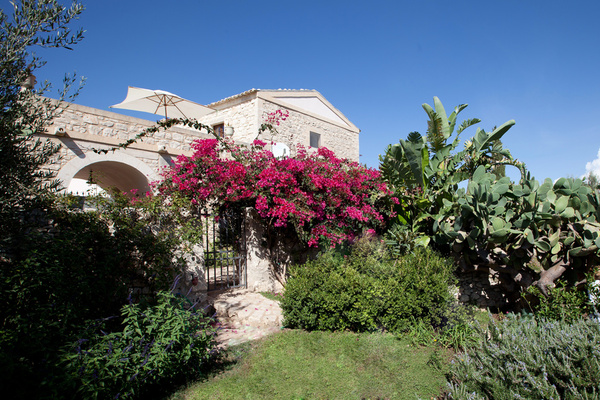 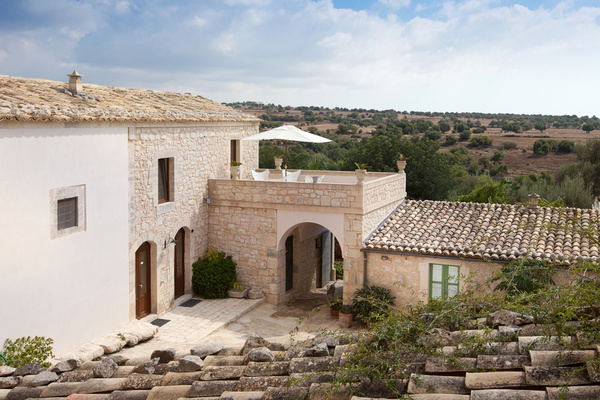 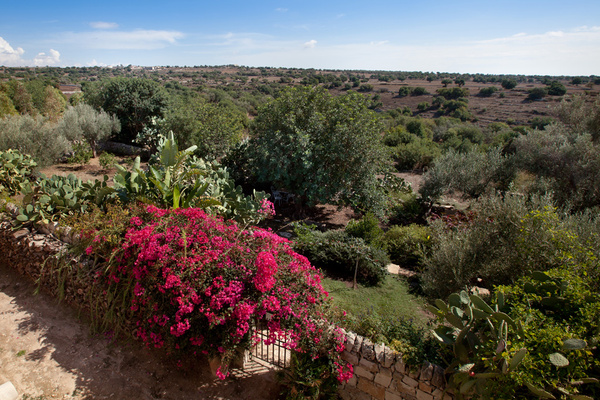 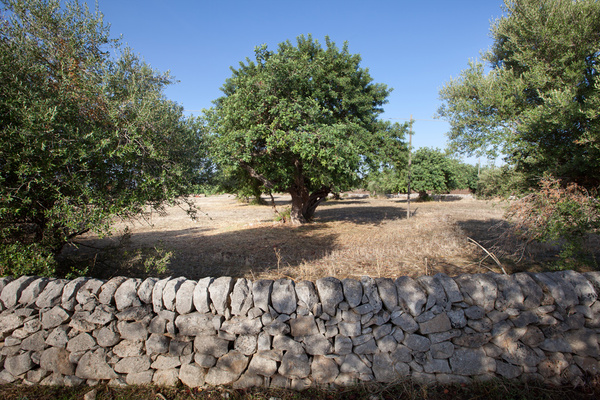 The residence and the garden where commissioned by Antonio Sortino Trono in 1778. The Country House was built by the same skilled workers who had constructed the Sortino Trono Palace in Ragusa Ibla, today a Unesco World Heritage site. The neo-baroque style, typical of the palaces of the southeastern part of Sicily that were rebuilt after the 1693 earthquake, is one of the characteristic architectural elements of the Cammarana Estate.
The dominant position of the surrounding countryside with its ancient prickly pear bushes (p. XVIII sec) and gardens of jasmine, old roses, bearded iris and Bouganville, renders this residential estate unique. The careful preservation of natural heritage, carob forests, wild fruit trees, native palms, the many varieties of herbs and some rare species makes this place a natural paradise. Wildlife finds an ideal habitat in the Plateau: wild rabbits, porcupines, buzzards, hoopoes, owls and foxes are the creatures that live harmoniously in our area.
Tenuta Cammarana has been preserved and cared for, by generations who have cherished it as if it were a precious jewel of the family, that is still today the soul of this enchanted site.

Free for our guests or to the public by appointment only.