The Turks learned the art of making hot baths (hamams) from the Persians and the Arabs. Hot baths were built in towns, for public use, and also in private palaces and gardens.

Originally, public hamams were built by religious charities (waqfs). It was in the nineteenth century that they were provided by private business and became associated with lower moral standards. Most private houses in Turkey now have private bathrooms and some of the old hamams have become tourist attractions. 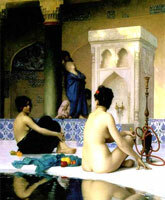