GIS do not fall into the category of design software but most of the world’s mapping agencies are now using GIS to produce their maps, even if they are then sold on paper. There is a discussion of the role of GIS in landscape and planning in Turner, T. City as landscape (1996). The uses of GIS in garden management include:

GIS also has a major role in landscape architecture and city planning. If you take a city plan and draw over it with a green marker pen, you can design an ‘open space system’ with parks and parkways. This is what Patrick Abercrombie did for London in 1943. It is still the foundation of open space planning for London. But what does the green ink actually mean:

These considerations force us to the conclusion that simply classifying land as ‘greenspace’ is inadequate. We need to:

The database can hold much of the data which landscape architects use: soils, geology, water, user preferences, contours etc etc. You can either purchase the data or you can put it in yourself. It can generate 3-D models and generate aerial photographs over them, with geographic precision. But this is difficult.

Environmental Systems Research Institute (ESRI) is a GIS supplier. The organisation was started by a landscape architect and it is now the world’s largest GIS company. ESRI make several products: 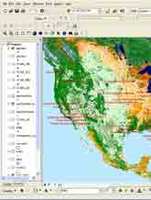