They were designed for horses and should carry horses. When first laid out in the nineteenth century, park roads were designed for horseï¾­drawn vehicles [Fig 10.15]. Carriages were an ornament to Regent's Park in London and to Central Park in New York. So long as carriages were horsed, park roads continued to fulfil their function. But as traffic became motorised, the balance of sideï¾­effects shifted from positive to negative. Motor vehicles were excluded from Central Park but remain a great environmental hazard in Regents Park, as they do in Boston's Park System. The trouble with excluding all vehicles from park roads is that they become vacant spaces. The best solution is to restore park roads to their original purpose: horseï¾­drawn vehicles. They could belong to private individuals or they could be available for hire. Carriage rides are popular in Central Park, New York, and at Beamish North of England Open Air Museum. 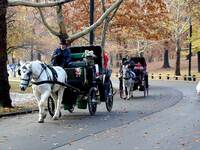