1831. The propagation-pot (fig. 451.) has a slit in the side, from the rim to the hole in the bottom, the use of which is to admit a shoot of a tree for propagation by ringing, in the Chinese manner. Opposite to the slit is an ear, or round appendage, with a hole for hanging the pot to a branch. To those who practise the mode of rooting shoots without laying them down to the ground, such pots will prove very convenient. In France and Italy they are formed in a similar manner, and for the same purpose, of tinned iron. Square pots are preferred by some for the three smallest sizes of pots, as containing more earth in a given surface of shelf or basis; but as they are more expensive at first, less convenient for shifting, and not admitting or such perfection of form as the circle, they do not, in our opinion, merit adoption. They are used in different parts of Lombordy and at Paris. The classic pot is the common material formed into vases, or particular shapes, for aloes and other plants which seldom require shifting, and which are destined to occupy particular spots in gardens or conservatories, or on the terraces and parapets of mansions in the summer season. The Chinese pot is generally glazed, and wide in proportion to its depth; but some are widest below, with the saucer attached to the bottom of the pot, and the slits on the side of the pot for the exit or absorption of the water. Some ornamental Chinese pots are square at top and bottom, and bellied out in the middle. The French pot, instead of one hole in the centre of the bottom to admit water, has several small holes about one eighth of an inch in diameter, by which worms are excluded. The French have also flower-pots, the under sides of the bottoms of which are concave (fig, 453.); by which means the water is never retained between the pot and the surface on which it stands, as is frequently the case with flat-bottomed pots. A grooved-bottomed pot (fig. 454.) is used for the same purpose. 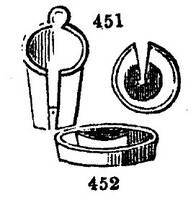