After these strong reds comes a drift of the brilliant orange African Marigold, one of the most telling plants of the time of year. Coming to the yellows of middle strength, there are some of the perennial Sunflowers, among them the one that seems to be a form of Helianthus orgyalis, described in the last chapter. This and some others are trained down to cover plants now out of bloom. The fine double Rudbeckia called Golden Glow is treated in the same way. Intergrouped with it is a useful pale form of Helianthus Ioetiflorus that takes up the colour when the Rudbeckia is failing. In the near end region of blue-grey foliage the bloom of Clematis davidiana{Clematis heracleifolia var davidiana}, also of a greyish blue, but of a colour quality that is almost exclusively its own, tones delightfully with its nearest neighbours of leaf and bloom. About here some pots of Plumbago capensis are dropped in; their wide-ranging branches, instead of being stiffly tied, are trained over some bushy plants of leaden-blue-foliaged Rue. Near this, and partly shooting up through some of the same setting, are the spikes of a beautiful Gladiolus of pale, cool pink colour, the much-prized gift of an American garden-loving friend. Tall white Snapdragons, five feet high, show finely among the gracefully recurved leaves of the blue Lyme Grass {Leymus arenaria}. Beyond is a group of Lilium auratum, and in the more distant front, pale sulphur African Marigold, just now at its best.The further end of the border also has grey foliage associated with pink Hydrangeas, white and pink Snapdragons, white Dahlias, purple Clematis, Lilium auratum and Aster acris. Yucca flaccida is still in beauty. 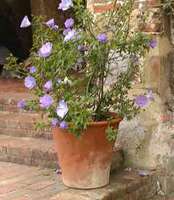