Book: A treatise on the theory and practice of landscape gardening, adapted to North America,1841
Chapter: Section I. Historical Sketches.

About Philadelphia there are several very interesting seats on the banks of the Delaware and Schuylkill, and the district between these two rivers. The country seat of George Sheaff, Esq., one of the most remarkable in Pennsylvania, in many respects, is twelve miles north of Philadelphia. The house is a large and respectable mansion of stone, surrounded by pleasure-grounds and plantations of fine evergreen and deciduous trees. The conspicuous ornament of the grounds, however, is a magnificent white oak, of enormous size, whose wide stretching branches, and grand head, give an air of dignity to the whole place. (Fig. 12.) Among the sylvan features here, most interesting, are also the handsome evergreens, chiefly Balsam or Balm of Gilead firs, some of which are now much higher than the mansion. These trees were planted by Mr. Sheaff twenty-two years ago, and were then so small, that they were brought by him from Philadelphia, at various times, in his carriage-a circumstance highly encouraging to despairing planters, when we reflect how comparatively slow growing is this tree. This whole estate is a striking example of science, skill, and taste, applied to a country seat, and there are few in the Union, taken as a whole, superior to it.* (* The farm is 300 acres in extent, and, in the time of De Witt Clinton, was pronounced by him the model farm of the United States. At the present time we know nothing superior to it; and Capt. Barclay, in his agricultural tour, says it was the only instance of regular, scientific system of husbandry in the English manner, he saw in America. Indeed, the large and regular fields, filled with luxuriant crops, everywhere of an exact evenness of growth, and everywhere free from weeds of any sort; the perfect system of manuring and culture; the simple and complete fences; the fine stock; the very spacious barns, every season newly whitewashed internally and externally, paved with wood, and as clean as a gentleman's stable (with stalls to fatten 90 head of cattle); these, and the masterly way in which the whole is managed, both as regards culture and profit, render this estate one of no common interest in an agricultural, as well as ornamental point of view.) 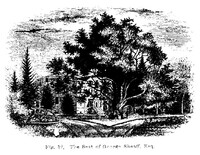